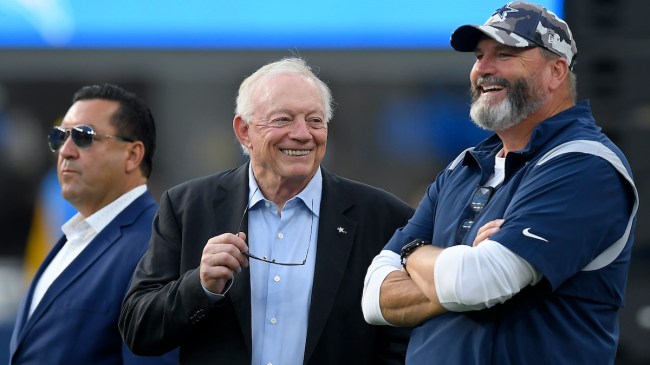 The competition to sign Odell Beckham Jr. is heating up and Dallas Cowboys owner Jerry Jones is definitely doing his best to court the star wide receiver into joining America’s Team.

Beckham Jr. remains one of the best free agents on the market after helping the Los Angeles Rams to their Super Bowl LVI victory last season. However, he has opted to stay on the sidelines so far in 2022 while recovering from an ACL injury.

With Beckham Jr. expected to be fully cleared after Week 10, more teams are now ramping up their interest. On Tuesday, Jones joined Dallas radio station 105.3 The FAN and gave his pitch to the three-time Pro Bowler.

Cowboys owner Jerry Jones on @1053thefan on Odell Beckham Jr.: “Odell is someone that we have all the appreciation in the world for what he is as a competitor. I know the Cowboys star on that helmet when he puts it on could look pretty good.”

The interest from the Cowboys makes sense after their failed attempt to acquire Houston Texans WR Brandin Cooks before the trade deadline. Beckham Jr. would be a massive addition to an underperforming passing attack that ranks 26th in the NFL for passing yards per game.

No Cowboys wide receiver has broken 100-yards in a single game so far this season. However, the outlook is more promising with Dak Prescott winning two straight games after missing five weeks with a thumb injury.

It seems Jones isn’t the only one from the Cowboys hoping Beckham Jr. lands in Dallas. Star linebacker Micah Parsons joined the pitch with his own plea on Twitter.

In a clip shared by the Complex Sports Twitter account, Beckham actually names the Cowboys as a potential destination along with the Bills, Packers, and Giants. He hasn’t ruled out a return to the Rams either.

As teams look to make a push for the playoffs or simply strengthen their offense for a deep playoff run, it’s worth keeping an eye on where Beckham Jr. eventually signs. It seems the decision will come sooner rather than later, maybe even in the next week.