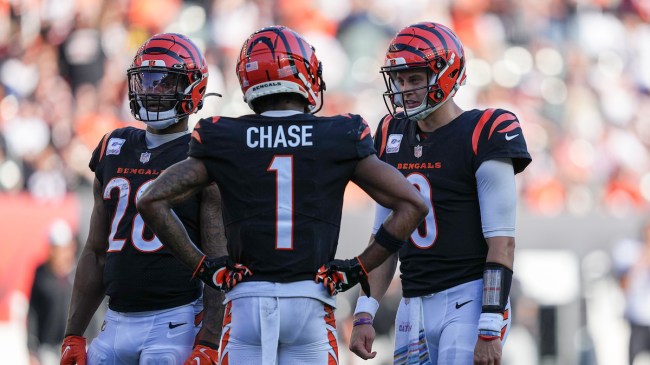 The Cincinnati Bengals are currently tied for the AFC North lead at 7-4 and the future is looking even more promising with the expected return of two key offensive threats in Week 13.

Despite losing Ja’Marr Chase in Week 7 and then Joe Mixon in Week 11, the Bengals have won three straight and five of their last six games. With a regular season rematch of the 2022 AFC Championship Game on Sunday, it appears they could finally be back in full force.

According to Ian Rapoport of NFL Network, the Bengals’ star wideout is expected to return this week against the Kansas City Chiefs after missing over a month due to a complicated hip injury.

From NFL Now: #Bengals WR Ja'Marr Chase is expected back this week. pic.twitter.com/4otvTGQjkl

Cincinnati Bengals Are Optimistic Ja’Marr Chase And Joe Mixon Will Return Vs. Chiefs

Chase actually practiced last week and Joe Burrow even jumped the gun by claiming his former LSU teammate would return to play against the Tennessee Titans. Ultimately, it didn’t happen.

The Bengals aired on the side of caution instead to allow Chase to recover. Head coach Zac Tayor confirmed following the game that the team would evaluate Chase on Wednesday. While there were no promises made, he certainly seemed upbeat about it.

Chase isn’t the only key offensive player to potentially rejoin the team either. Mixon, who exited the game early against the Pittsburgh Steelers, remains in concussion protocol. However, ESPN NFL insider Adam Schefter has reported that the running back is trending in the right direction for a return on Sunday.

Bengals’ RB Joe Mixon, who missed Cincinnati’s win against the Titans due to a concussion, “is trending in the direction” of being able to play Sunday vs. the Chiefs, per source.

Aside from struggles against the Cleveland Browns in Week 8, the Bengals have managed to continue winning without Chase. In the two games without Mixon, backup RB Samaje Perine has stepped up big time with 4 total touchdowns.

Patrick Mahomes and the Chiefs will look to avenge last season’s AFC Championship Game loss, so the Bengals will want all the help they can get. Mixon and Chase will certainly provide a boost. So if both are healthy enough to return, Sunday’s thrilling matchup is a can’t-miss for football fans.