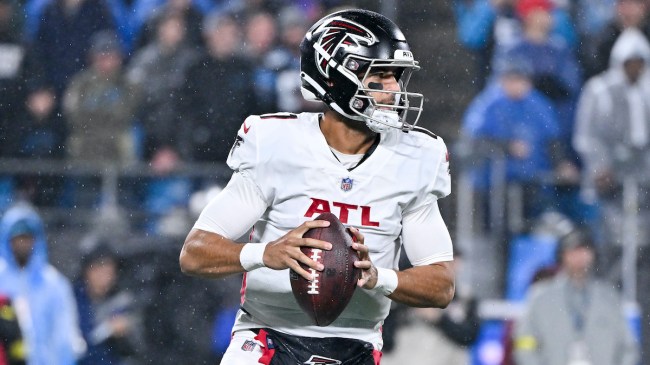 The Atlanta Falcons fumbled an opportunity to move atop the NFC South on Thursday night. After another unimpressive performance from Marcus Mariota, fans are practically begging for the team to start rookie Desmond Ridder.

Mariota struggled to move the ball downfield in the Falcons’ 25-15 loss to the Carolina Panthers. He went 8-of-14 for 63 yards and an interception in the first half as the Falcons trailed 13-3. The former Oregon standout rallied for 2 touchdowns in the second half, but it wasn’t enough to close the gap.

The Falcons’ struggles were summed up in their final few possessions of the game with Mariota sacked twice on key 4th downs. On top of it all, he threw arguably the worst pass attempt in NFL history.

Marcus Mariota with one of the most "F*** IT" throws I've ever seen 💀pic.twitter.com/uhxIrTEAEL

Mariota gets tripped up on 3rd and 4 midway through the fourth quarter. He makes a desperate attempt to avoid the sack and lobs the football up for an easy interception. It was a moment that had football fans across the country screaming, “What were you thinking?”

Luckily for the Falcons and Mariota, he was ruled down and the pick was overturned. He didn’t exactly make up for it and was sacked on the next play.

Mariota’s struggles through the air were a consistent theme. He finished the night 19-of-30 for 186 yards with 1 interception and 5 sacks. TE Kyle Pitts had it particularly rough with badly underthrown and overthrown passes on several occasions.

the Mariota Masterclass was in full effect tonight 🔥 pic.twitter.com/NugxBk36DV

After falling to 4-6 on the season, Falcons fans are fed up with Mariota’s lackluster performances. They’re now calling for Ridder, who the team drafted in the third round of the 2022 NFL Draft, to start instead.

alright I'm ready for Ridder, done with this

The rookie quarterback impressed during the preseason but hasn’t seen the field since. Despite Ridder’s lack of experience, fans are simply tired of watching Mariota struggle.

Mariota was averaging 173.4 passing yards per game going into Week 10 and the Falcons passing attack ranked 30th in the NFL. His horrendous pass attempt was the final straw for some.

It was a rookie mistake from the eighth-year quarterback, so why not let an actual rookie get a chance? It’s hard to believe Ridder could be any worse.

Even with all the pleas to start Ridder, it doesn’t seem like it’s happening anytime soon. Falcons head coach Arthur Smith later revealed that he did not consider benching Mariota during the game.

Arthur Smith's first question to open his presser: Did you ever consider putting Desmond Ridder in?
"No."

The Falcons will need a better performance in Week 11 against the Chicago Bears to stay in the hunt for the NFC South. However, the pressure is mounting on the team to make a change at quarterback.