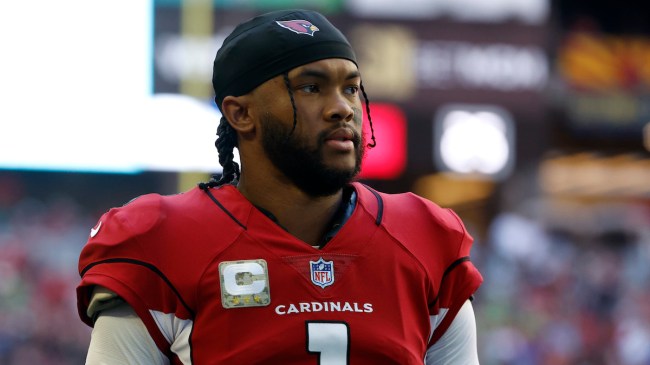 There’s no surprise that Minnesota Vikings CB Patrick Peterson is not a fan of his former teammate Kyler Murray. However, it’s now escalated to the point where the Arizona Cardinals QB has called him out for his comments.

During the Vikings’ victory over the Cardinals back in Week 8, Peterson threw shade at his ex-teammate with some special turnover celebrations. The Cardinals have lost 3 of their 4 games since then and fallen to a disappointing 4-8 record on the season.

On Wednesday, the Cardinals’ struggles this season came up as a topic on Peterson’s All Things Covered Podcast. And he didn’t hold back with the criticism. The Vikings’ cornerback claimed HC Kliff Kingsbury will be scapegoated for the problems, but then put Murray on blast for being the real issue.

Patrick Peterson comments on what's going on with his former team the Cardinals, since they are always in the news.

Peterson spent two seasons with Murray in Arizona before joining the Vikings in 2021. Yet, it was all he needed to develop a rather unfavorable perception of the 2018 Heisman Trophy winner. He doesn’t think Murray cares much about Kingsbury or anyone really.

Kyler Murray Fires Back At Patrick Peterson Over Podcast Comments

Murray denied the claims via Twitter later that day and called out his former teammate for being “on some weird sh**t”. He particularly took issue with Peterson publicly dragging him rather than reaching out privately.

This isn’t true…you on some weird shit @p2 you got my number, if you really felt like this as a “big bro” or “mentor” you supposed to call me and tell me, not drag me so your podcast can grow… https://t.co/MFqbMKh3la

The Cardinals QB also threw jabs directed at Peterson’s lack of leadership as a veteran player. He even suggested the Vikings CB was simply using the moment to help grow his own podcast.

It’s certainly plausible. Peterson is having no issues blasting Murray as the Cardinals struggle this season. But it’s worth noting he played for the Vikings last season and hadn’t offered nearly the same amount of criticism.

Even DeAndre Hopkins offered a response that appeared to be about the timing of Peterson’s comments.

You don’t kick a man when he’s already down,

Not only has Murray taken a step back for the first time in his NFL career this season, but he’s already dealt with an unreal amount of drama surrounding his passion for video games. On top of it all, the Cardinals QB just returned from a hamstring injury on Sunday after missing two games.

Peterson’s criticism seemingly comes out of the blue. It’s not like the Vikings and Cardinals faced off this week or Murray did something to provoke him.

Unfortunately, the two won’t face off again this season, barring a surprise playoff push from the Cardinals. In the meantime, Murray will need to block out all the noise if he wants to lead the team back to success.