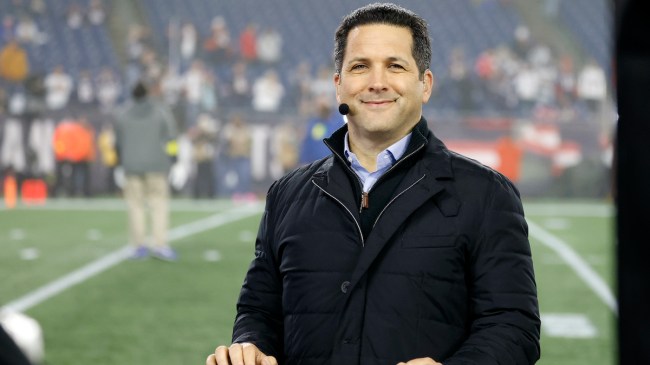 The Minnesota Vikings pulled off a comeback win over the Washington Commanders and Kirk Cousins’ viral postgame celebration seems to have left a lasting impression on ESPN’s Adam Schefter.

Ahead of Monday Night Football’s Ravens-Saints matchup, the senior NFL insider joined the broadcast crew and paid homage to the Vikings QB. Much like Cousins, who was blinged out on the flight home, Schefter had his own excessively iced-out look.

He even fully committed to the act by going completely shirtless and repeating Cousins’ signature catchphrase, “You like that!”

Cousins also showcased some hilarious dance moves while celebrating with his teammates on Sunday. Clearly, Schefter liked that too!

The side-by-side comparison is uncanny, although the Vikings quarterback definitely has a bit more groove in his step. You’ve got to credit Schefter for giving his best attempt though.

It was a legendary move from the ESPN insider and social media was buzzing about it. The fact that Schefter was shirtless was definitely the most distracting part of it all.

Who knew @AdamSchefter was yolked? pic.twitter.com/WlFIwkmnhD

It’s safe to say, nobody was prepared to see a shirtless Adam Schefter on Monday night. Some weren’t exactly happy about it either.

. @AdamSchefter Don't do this ever again pic.twitter.com/rK07eePTp1

Cousins happened to join the ManningCast during the third quarter of the game and the three reacted to Schefter’s impression. Eli and Peyton didn’t appreciate having to rewatch it, but Cousins actually credited Schefter for completing the ensemble with the bulky blue light glasses.

The Vikings have been going all out on celebrations this season, both on and off the field. Not even Cousins knows what’s in store if they continue this impressive run. Fans are sure to absolutely love it either way, but most will probably hope Schefter takes a break from the impressions.