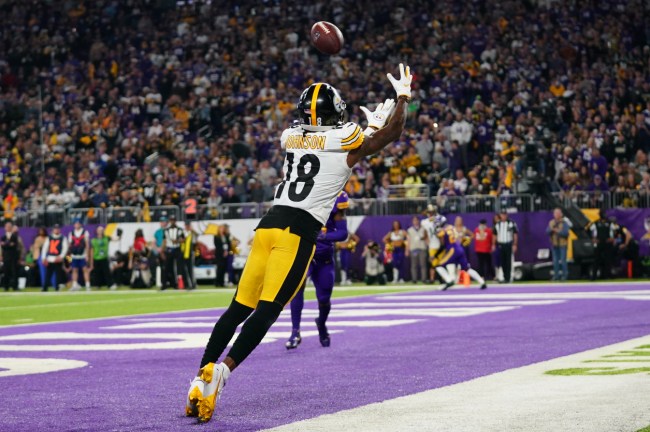 It is officially wide receiver extension season. There have been a ton of wideouts to ink new deals, with Davante Adams and Tyreek Hill among the first early in the offseason.

Over the past month, it has been Terry McLaurin, Deebo Samuel, and DK Metcalf. Now, we can add another one to the list — Pittsburgh Steelers WR Diontae Johnson.

According to Mike Garofolo of NFL Network, the Steelers have signed Diontae Johnson to a two-year, $36.71 million extension. Yes, that’s it.

The #Steelers and WR Diontae Johnson have agreed on a two-year, $36.71 million extension, source says. The sides worked last night and this morning to end his hold-in with a shorter deal than we’ve seen from others that allows him to be a free agent again after the 2024 season.

Here are some more details on the contract, and it looks like Johnson will get a big payday this year.

The #Steelers guaranteed $27 million of the deal and Johnson receives $19 million in Year 1. He gets financial security, the team keeps him at a good number, he can cash in again soon and he’s back on the practice field today to work with Trubisky and Pickett. Situation resolved. https://t.co/IQPzCXtop1

Nonetheless, this is far less than the other contract we have seen from McLaurin, Deebo, and Metcalf, although you could argue Johnson isn’t yet on the same tier as the others.

Still, fans reacted as such and were stunned at the low price for Johnson.

This is a great deal for the #Steelers and short term for Diontae Johnson to have a quick turnaround and be back on the market by the time he’s 29. $18.355/year average and guaranteed $27M. https://t.co/UcNnexe8aw

Very interesting. $18.355M average per year makes him the 17th-highest paid wide receiver, obviously the shorter term is a part of that.

Steelers must have been able to argue his insane volume was boosting some numbers, less productive on a per-reception basis than the top guys https://t.co/MBrR6SoAIz

This is great for Pittsburgh but a little odd from Diontae’s POV imo https://t.co/V6iCecjHJI

With JuJu Smith-Schuster playing for the Kansas City Chiefs, all eyes are on Johnson to take over as the #1 WR. In 2021, he had career-highs in catches (107), yards (1,161), and touchdowns (8). So, this makes a lot of sense for Pittsburgh, although Johnson likely could have earned a little more money.

The biggest concern for Johnson is the QB play. As of now, Mitchell Trubisky is the starter, although his recent struggles could send rookie Kenny Pickett into the starting role. Still, the QB room might be a rough one in 2022 and could lower Johnson’s numbers.

Overall, Johnson gets a nice payday, and the Steelers keep their top target on the field.