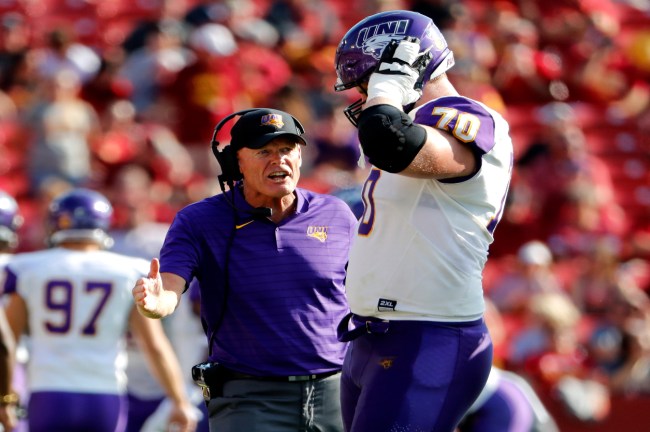 NFL training camp is in full force, and the first preseason games are right around the corner. There have been plenty of storylines, with extensions being given out, devastating injuries, and even fights during practice.

One developing story is regarding New Orleans Saints rookie offensive tackle Trevor Penning. The former Northern Iowa star has been quite the story in New Orleans, and not for a good reason.

Penning has been causing fights during practice. On August 1, Penning got into it with Payton Turner.

A day later, Penning got into it with a couple of other teammates.

Rookie offensive lineman Trevor Penning continues to make friends with the #Saints defense. First he got into with J.T. Gray, then it was Scott Pachan. pic.twitter.com/BkqpRb08Wd

Then, the final straw came on Wednesday. During Wednesday’s practice session, Penning again started a fight and then got kicked out of practice altogether.

#Saints rookie 1st round pick, OL Trevor Penning, has been kicked off OTAs on Wednesday after starting a fight at practice for 3 consecutive days.pic.twitter.com/ZYj5yMJcdg

NFL fans have mixed reactions to this. On the one hand, the aggressiveness of Trevor Penning is a good sign. However, there might be a lot of penalties going against Penning if he can’t learn to contain himself.

What in the world is wrong with him. He needs to take a step back and calm down. https://t.co/8LNazJBwBR

It’s really beyond me how these dudes throw bare-handed punches at other dude with a rock solid helmet on like they’re doing any damage 🤦‍♂️🤦‍♂️ https://t.co/5oeMC1j0V7

Unless I’m missing something here:

Clip 1: unless Penning is jawing he is responding to a guy cold cocking him for no real reason
Clip 2: little too amped up, but not bad or instigating a fight
Clip 3: love the effort and a heck of a block

LMAOOOOOO that’s the type of energy that you need from an OL ! Real scumbag ! No nice guys on the OL https://t.co/1QMm8PJ326

Penning’s raw athletic ability sent him flying up draft boards, and the Saints selected him with the No. 19 overall choice in the 2022 NFL Draft.

Nonetheless, J.T. Gray, who Penning got into a scuffle with on Tuesday, was honest about the situation.

J.T. Gray on his dust-up with Trevor Penning at yesterday's practice: “Just two competitive guys going at it. Just giving extreme effort and going out there and holding the standard of Saints football.” #Saints

Still, if he keeps doing things like this during practice, he might not see much playing time during the season.