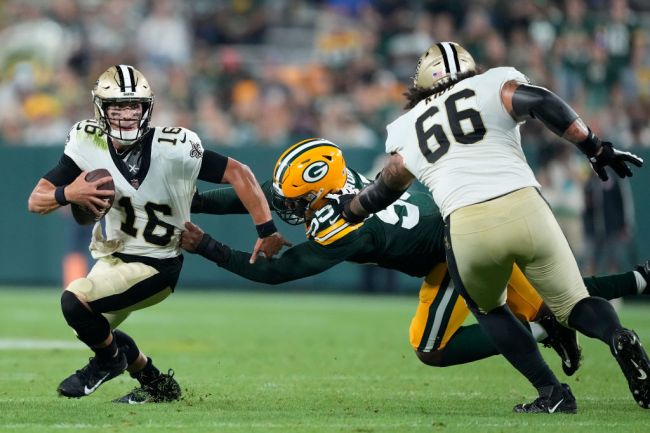 The New Orleans Saints drafted Ian Book in the fourth round of the 2021 NFL Draft. After one season in the league, it seems the former Notre Dame quarterback still has a lot to learn before moving up on the depth chart.

Entering the 2022 NFL season, the Saints have named Jameis Winston as their starting quarterback. In an effort to prevent unnecessary injuries, backups Andy Dalton and Ian Book took a majority of the reps in the team’s preseason opener against the Houston Texans.

It wasn’t a pretty showing for Book, who turned over the ball twice, and he was back in charge on Friday against the Green Bay Packers. Much to Saints fans’ horror, his performance was nearly as bad as the week before.

Book had issues keeping ahold of the ball during snaps in the first preseason game and gave up a fumble to the Texans. It seems those same struggles carried over to Friday when he fumbled the ball late in the second quarter.

To make matters worse, his next possession ended with a pick and the Saints trailed by two scores going into the first half’s two-minute warning.

Fans were hoping for a bounce-back game from the young quarterback. So a repeat of last week was less than ideal and fans were absolutely ruthless in clowning him.

A reminder that Brian Kelly made it to the playoff with Ian Book as his quarterback twice.

Ian Book needs to be attached to any Sean Payton trade. That’s his mans… not ours

Some even thought he ought to consider a new career path after this poor performance. Telecommunications was the running theme for some reason.

Ian Book bout to be working at Cox Communications.

Ian book finna be clocking in at AT&T

It wasn’t all bad for Ian Book though. The Saints got the ball back following the interception and scored a touchdown just before the half. It was a solid pass and very much needed given how the half went. Even then, Saints fans were more interested in WR Chris Olave’s involvement in the play.

While Book didn’t have any turnovers in the second half, it didn’t get much better. The Saints wouldn’t score again and lost 20-10 to the Packers. After these preseason performances, there’s still so much for Book to improve on if he wants a future starting position.

Breece Hall sure doesn't look like a rookie. https://t.co/I2uNCKWkpC

Luckily for Saints fans, Winston will take over once the regular season begins with Dalton serving as backup. If things go awry, utility man Taysom Hill is always an option too. However, with star WR Michael Thomas set to return this season, it won’t be the end of the world if Ian Book has to start.