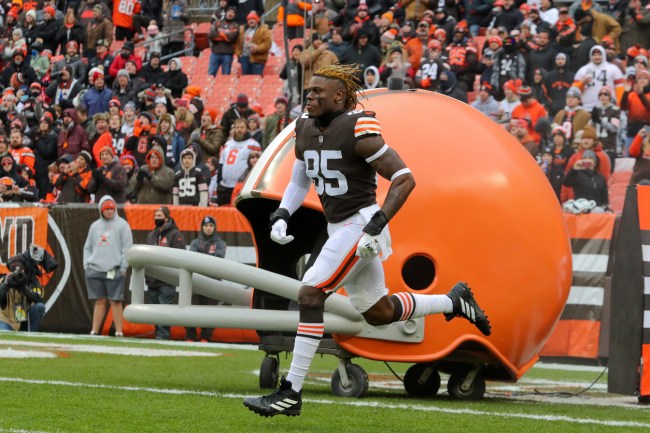 The Cleveland Browns just keep making huge decisions. First, they acquired Deshaun Watson from the Houston Texans and gave him a fully-guaranteed $230 million deal, even with all of the legal questions surrounding him. Then, they gave tight end David Njoku a new deal, according to Ian Rapoport of NFL Network.

The #Browns and franchise tagged TE David Njoku have reached an agreement in principle on a large new 4-year, $56.75M contract extension, sources tell me and @TomPelissero. He gets $28M guaranteed at signing on the deal that averages $14.1875M per year, the fifth highest paid TE.

The Browns had previously used the franchise tag on Njoku, although both sides were hoping to agree on a long-term deal.

Well, like it or not, there is Njoku’s deal, which puts him as one of the highest-paid tight ends in the entire NFL.

Njoku can turn out to blow past the value of this contract. On the other hand, it hasn’t been promising for Njoku. The former Miami Hurrican has caught 148 passes for 1,754 yards and 15 touchdowns in five seasons. He has yet to catch more than 56 balls in a year (that happened in 2018) and has not gone over the 700-yard mark either.

So, the Browns rightfully got torched on Twitter for paying Njoku big bucks.

$14 million/year for 2.3 catches & 27 yards/game, very good. Cleveland seriously needs to up his production, cause the stats he’s accumulated over his career thus far he should’ve had in TWO years for a TE with his abilities.

Njoku is earning more than Mark Andrews. LOL. EDC the 🐐 but slide Mark some extra dollas under the table. #RavensFlock

The Christian Kirk of TEs

This is a common theme and for good reason. Now, the addition of Watson could benefit Njoku in a huge way, but this contract still seems like a massive risk for a player who has yet to produce like a top 10 tight end in the NFL.

This contract value and AAV is higher than Mark Andrews' https://t.co/3RKN9ra9Pw

As of now, this is a puzzling decision by the Browns. But if Njoku can put together a nice string of seasons, in a few years this contract just might be able to look like a bargain.