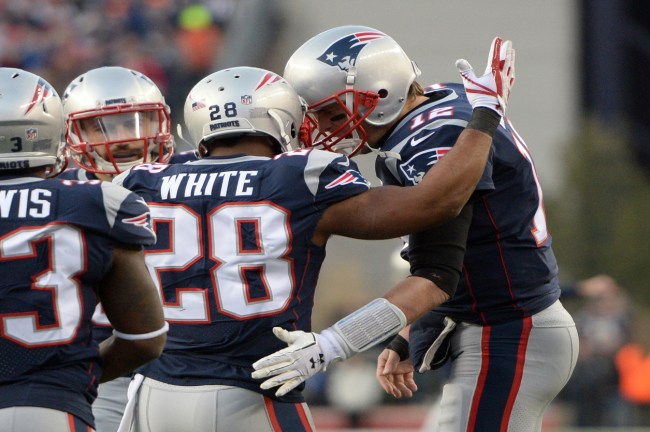 The New England Patriots watched running back James White for a long time in Foxborough. Ever since the 2014 NFL Draft, White has been a member of the Patriots.

Now, he has announced his retirement with a lengthy post on Thursday morning as he begins a new chapter in his life.

New England will be in my heart forever. Thank you for unwavering support over the years. I am forever grateful.

This chapter has been one that I will cherish. I look forward to what is next. pic.twitter.com/8qd0FbA0tW

White suffered a hip injury during the 2021 campaign that kept him on the sideline more often than not, and he was also slow in progressing during the offseason. Now, at the age of 30, White has decided to call it a career and hang up his cleats.

Patriots fans (and NFL fans) reacted to the news of James White deciding to retire from the NFL.

The Patriots have had a strong, constant legacy of those particular mold of running backs, basically the “Kevin Faulks.” From Faulk on down to Shane Vereen, Dion Lewis and then James White (a little Danny Woodhead too). White was one of my favorites. Helluva career. https://t.co/psYhB7IBYq

Man whis one sucks. Thank you @SweetFeet_White for everything you did for Patriots nation. You are truly one of the best. Now go live your life and have fun https://t.co/HJcx5rfpSY

Underrated player who was exceptional out of the backfield https://t.co/O8bOXwqxY1

One of my favourite players ever to wear a Patriots uniform.. sucks he went out because of an injury. Thanks for everything @SweetFeet_White https://t.co/yrd4uGf2hF pic.twitter.com/xPhq5qleDd

White made many memorable plays in a Patriots uniform, including the Super Bowl walk-off in that improbable comeback against the Atlanta Falcons.

James White is the author of the only walk off touchdown in Super Bowl history. An overtime winner.

He played for eight seasons and NEVER lost a fumble.

The definition of reliability. pic.twitter.com/PFWufdhIUU

White’s name will forever be tied to Patriots history for this game and that play, and he was a significant target for Tom Brady for those years in New England.

Fans and analysts came quickly to remember the best plays of White’s career, and while the Super Bowl winner is the most notable, he also dazzled plenty of other times.

Cut up some of my favorite recent James White plays that I had in the vault. An all-around receiving back, who was an underrated runner.

Flex him out wide, work LBs on option routes, screens, inside runs, outside runs. Could do it all. #Patriots pic.twitter.com/YROs88CYjz

James White announced his retirement from NFL…. Here's the man on the PITCHpic.twitter.com/XPNzcYqliN

Hats off to an incredible career from James White, who finished with 4,556 total yards and 36 touchdowns.