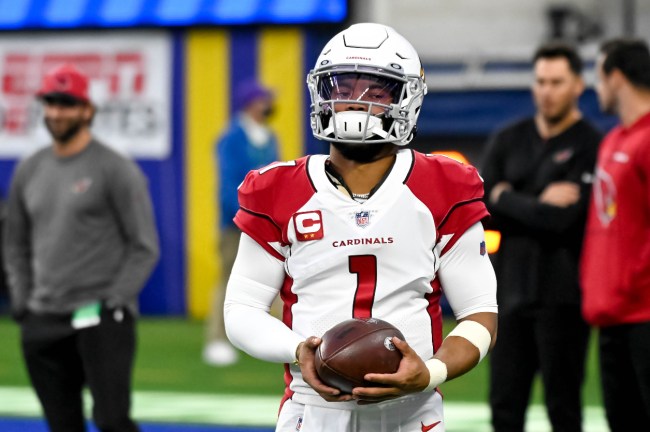 The Arizona Cardinals will be kicking off OTAs without their Kyler Murray. As the offseason has progressed, the situation regarding Murray and the Cardinals has not changed one bit.

On Monday, Adam Schefter of ESPN reported that Murray was not going to attend OTAs — which isn’t exactly new information.

Cardinals’ QB Kyler Murray will not be at Arizona’s OTAs this week, as expected. All continues to remain quiet on his contract front, for now.

Murray and his agent, Erik Burkhardt, have held firm to their insistence on receiving an extension before he plays the final year of his rookie deal.

However, as of Monday morning, nothing has changed on that end for either side.

Now, OTAs aren’t mandatory, but the Cardinals’ young QB not partaking is more than the fact that he doesn’t want to — he wants a new contract, plain and simple.

NFL fans aren’t thrilled at Murray’s stubbornness and wasted no time giving reminders of his poor performance in the playoffs.

Buddy has won zero playoff games, only played in 1 playoff game, never thrown for over 26 TD’s or 4,000 yards in a a season, hasn’t won double digit games, has had double digit INT’s every season, and wants to be paid 40m a year… LOL https://t.co/nY4eZVCEhc

What has he done? https://t.co/kTRkH52EYN

There should be a law saying a QB can’t get a new contract until they win a playoff game. 🤪🤪🤪

Sure, Murray’s lack of playoff success is a huge downfall, but it certainly didn’t help that the Cardinals had to face the Los Angeles Rams in the Wild Card Round this last time around.

Still, Murray wants to be paid like one of the best quarterbacks in the NFL.

This has become a common theme, especially for a superstar or potential franchise quarterbacks like Murray. But, the Cardinals have tripped down the stretch the last couple of seasons, and although there are other reasons, Murray hasn’t done himself any favors.

Some fans even joked that Murray should’ve decided to play in the MLB for the Oakland Athletics — the team that drafted him at No. 9 overall in the 2018 MLB Draft.

Murray’s time is running out, and him skipping OTAs might not be a huge deal — after all, it was expected, and they aren’t necessarily mandatory.

But the ongoing contract situation between Murray and the Cardinals doesn’t appear to be getting resolved anytime soon, putting both sides at an impasse with the NFL season still a few months away.