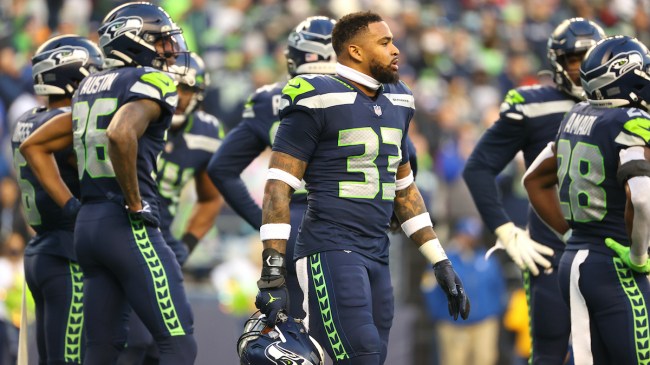 The Seattle Seahawks kicked off their 2022 season with a thrilling 17-16 win, but it appears to come at the cost of their superstar safety, Jamal Adams.

The first Monday Night Football of the year was mostly overshadowed by Broncos HC Nathaniel Hackett’s mind-boggling late-game decision, which he has since changed his mind on. Despite most fans not expecting much from the Seahawks, the win put them atop the NFC West.

Unfortunately, Jamal Adams suffered a seemingly serious leg injury while blitzing his former QB Russell Wilson early in the 2nd quarter. The three-time Pro Bowler limped off the field in pain before needing to be carted back to the locker room.

Initial reports suggested serious damage to his quadricep tendon and it was confirmed on Thursday. Adam Schefter reported that Adams had officially been placed on the IR and is expected to undergo season-ending surgery.

It’s a devasting blow for the Seahawks defense just one game into the season. Adams is a star and holds the NFL’s single-season record for most sacks by a defensive back (9.5), so his presence will be sorely missed.

However, it’s something the Seahawks have grown accustomed to. Since being traded from the New York Jets in 2020, injuries have plagued Adams. Even after the Seahawks made him the highest-paid safety in the league, the same story continues.

He’s only played for 12 games in each of his two seasons with the Seahawks and his 2022 campaign is over after just 1. Understandably, Seahawks fans were in their feels following the news.

NFL Fans React To Star Safety Suffering Yet Another Injury

One fan noted how particularly unlucky Adams has been since joining the Seahawks. He’s missed more games each season for the Seahawks than he did his entire time with the Jets.

After this year is over, he'll have missed 25 games in three seasons with the Seahawks.

Brutal injury luck. I feel awful for him. https://t.co/nNMxvXBgm1

This man has been so unlucky it’s wild

Of course, some trolls commented on how the Jets seemingly “won” this trade. But others were quick to shut down this kind of talk. Constantly dealing with injuries can take a toll, so joking about a season-ending one could be considered insensitive.

The “worst trade ever” comments ain’t necessary rn..he’s a human being who’s gotta deal with a season ending surgery and with a mental recovery, shit sucks man… praying for you Jamal 🙏🏽!!

Not all fans were like that though. Even a fan of the 49ers, an NFC West rival, showed his sympathy towards Adams.

Damn I got no love for Seattle but this is terrible. Awful that it happens on a big play too.

The Seattle Seahawks will face the San Francisco 49ers on Sunday. They’ll be without Jamal Adams for that game and likely any other game this season.

Head coach Pete Carrol has already named backup Josh Jones as the replacement. But he’ll have big shoes to fill starting this Sunday. In the meantime, Seahawks fans will hope Jamal Adams has a speedy recovery.