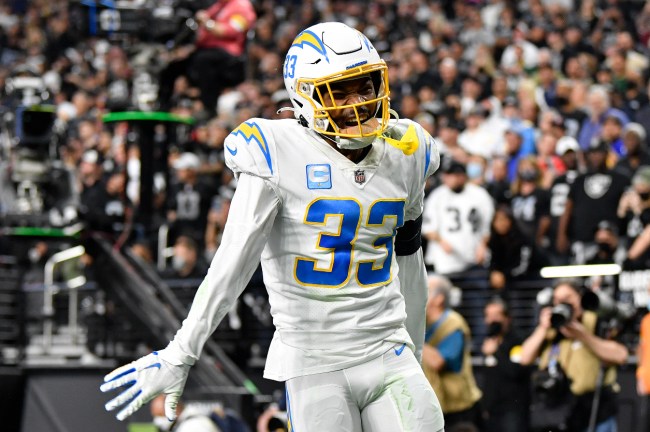 NFL training camp season is here. All 32 teams have kicked off camp, and the storylines are circulating nonstop. One of the biggest storylines for the moment is the contract situation for a couple of star players.

San Francisco 49ers wide receiver Deebo Samuel is one, although Kyle Shanahan insists a deal will be done soon. But the other big one is Los Angeles Chargers star safety Derwin James.

Both sides have been working toward a new deal, but according to Daniel Popper of The Athletic, Derwin James isn’t practicing until a deal is done.

Brandon Staley said Derwin James is not practicing because of his contract situation. Staley feels like the two sides are close and said James — who had offseason shoulder surgery — will be full go once the contract gets done.

James did show up to training camp, which is an encouraging sign. But, he won’t be practicing until a new deal is in place.

This is the final year of his rookie deal, and when healthy, James is one of the best defensive players in the NFL. Just watch this play.

The #Chargers have optimism that a new deal with Pro-Bowl Safety Derwin James will be reached, per @JFowlerESPN

Expectation is that he'll become the highest paid Safety in the league. pic.twitter.com/6BIzsGwxYj

As stated, James will likely become the highest-paid safety in the NFL with his new deal, and it’s not too hard to justify that.

Yet, NFL fans had mixed feeling about James sitting out of camp for the time being.

?? Bruh hasn’t done a damn thing to deserve that 🤣 https://t.co/Qxa9xlURpC

On the other hand, Chargers fans want this deal done ASAP.

Let’s get this done … don’t play with this https://t.co/7j1EqqoSMt

James is electric and can play just about anywhere on the field. Everybody can’t wait to see a defense that includes JC Jackson, Joey Bosa, Khalil Mack, and Derwin James.

Hopefully, a deal gets done soon.