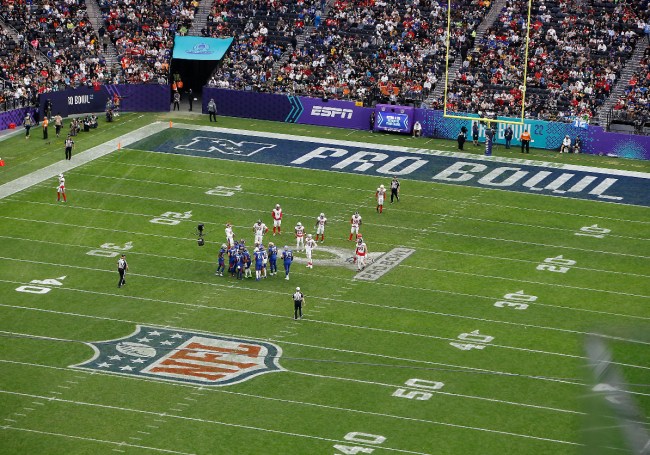 The NFL Pro Bowl Game is always an afterthought. The weekend after the conference championship games and before the Super Bowl, the league decided to sandwich in the Pro Bowl Game.

As such, the game has become something that people overlook and tend not to focus on. Even when the game was played the week after the Super Bowl, it was still a miss regarding viewership, fan interest, and even player interest.

This year, the Pro Bowl again featured no tackling, prompting some to say it was a game of two-hand touch and making it even more boring.

The NFL has decided to consider removing the game altogether or pitching some other idea to give those players some exposure.

The NFL is discussing the Pro Bowl week and ways to improve it — including possibly eliminating the traditional game and using that Sunday to showcase the players in it. Essentially, what are the alternatives?

The discussion has been lively, and both players and fans have pitched some rather interesting proposals — most of which would be more entertaining than the game itself.

NFL fans and players have some rather fun ideas

There are a lot of different directions the NFL can decide to go in, and Melvin Gordon and Chad Ochocinco tossed out some thoughts.

Have the current pro bowlers play against the past era of pro bowlers, like an old school vs new school, don’t even need pads, can be flag formatted, would break the viewing ratings for a Pro Bowl easily… 🏈 https://t.co/z1CpvshyLh

Others are itching and begging for the throwing competition to return as well. Can you imagine Patrick Mahomes, Justin Herbert, and Josh Allen throwing deep bombs?

Need the NFL to bring this back, give me Mahomes, Rodgers. Allen, Zach Wilson and Herbert and whoever else to just launch nukes pic.twitter.com/g0YJNAgD2g

The ideas kept flooding in, and some of these are actually genius.

Just have the two worst teams in the league play for the No. 1 pick in the NFL Draft https://t.co/DjH6NMbnpB

It's a flag football game featuring the normal NFL players (plus a few in-shape legends) but before each quarter each player draws a new position out of a hat and has to play it for the entire quarter. https://t.co/5XbwVQz8ex

The ideas are brewing, and the consensus seems to want the QB skills competition back for starters. That would be fun.

Nonetheless, it is refreshing to see the NFL considering ditching the game and replacing it with something more entertaining for both parties.