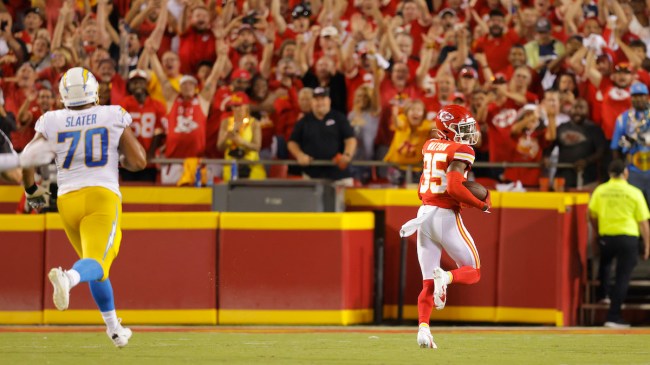 The Los Angeles Chargers looked in control against the Kansas City Chiefs on Thursday night, but one disastrous play involving Gerald Everett in the 4th quarter proved to be the turning point.

The Chargers got out to an early lead with their first drive and held onto it up until the end of the third quarter. Then the Chiefs kicked a field goal to tie the game at 17-17. Justin Herbert drove all the way down the field on the following drive to put his team on the 3-yard line.

On 1st & goal and with Austin Ekeler in the backfield, one would assume the Chargers would retake the lead with at least a field goal if not a touchdown. But that’s not what happened.

Herbert drops back, attempts a pass to his tight end Gerald Everett, and it goes horribly wrong. Chiefs’ cornerback Jaylen Watson jumps the route and returns it for a 99-yard Pick 6.

The @Chiefs take the lead on the Pick-6!#TNFonPrime | Watch NOW on @PrimeVideo pic.twitter.com/yTeXRrbFWU

It seemed like a classic case of miscommunication. Red zone interceptions are nothing new after all. However, upon closer review, the commentators took note of Everett’s actions right before the play.

Everett, who just caught the previous two passes, appears exhausted. He signals to the sideline in an attempt to make a personnel change. Since the Chargers were running a hurry-up offense, he’s forced to remain on the field.

The tight end is clearly gassed on the play in question and runs a lazy route. The resulting Pick 6 gave the Chiefs the lead and they held onto it until the end.

#Chargers TE Gerald Everett caught back-to-back passes for 7 and 26 yards and was gassed. He motioned to be taken off the field, but the Chargers were going tempo.

With the game ending 27-24, that turnover played a crucial part in the Chargers’ loss. Afterward, the internet exploded with fans pointing the finger and blaming a number of people.

Everett is the obvious first choice. There’s no doubt he was absolutely drained but one could argue that’s no excuse. He’s three yards away from the endzone and his route isn’t that complicated.

The Chargers tight end seemingly gives up on the play and doesn’t cut back inside, which is where Herbert expected him to go.

The Chiefs CB has outside leverage on the play initially, so if Everett boxes him out and cuts inside he should score without an issue. Instead, Watson is the one who jumps inside and we all know what happens from there.

On the bright side, it wasn’t all bad for Everett. He recorded 71 yards on 6 receptions and was second on the team behind Mike Williams with Keenan Allen injured.

Gerald Everett has to work inside there with that cornerback in outside leverage. Turns into a 99-yard pick 6.

There were fewer arguments against Herbert, who took a brutal hit to the ribs late in the game. Watson appears to bait him with the outside leverage and some fans argued the quarterback should’ve seen it coming.

Unfair to pin it on one person. Everett should have been pulled, play-call wasn't great, Herbert missed the defender undercutting inside. Just ugly all around https://t.co/gGtQrm4vCj

The majority of fans blamed head coach Brandon Staley and the coaching staff though. They could have subbed Everett out but chose not to.

Say what you want about Everett, he knew he wasn't okay and the staff decided against it.

Gerald Everett was gassed after his big play

Instead, Chargers go to him again next play

He doesn’t give a great effort, pick 6

Staley’s overtime timeouts against the Raiders last season cost them a trip to the playoffs and his decision on Thursday ultimately backfired too.

The Chargers will likely have an easier time bouncing back next week against the Jacksonville Jaguars. However, with the pattern of Staley’s questionable coaching decisions, Chargers fans might be having some concerns.