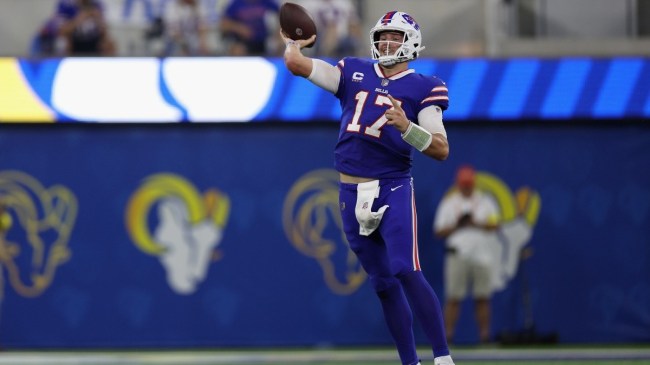 The opening night of the 2022 NFL season ended with a blowout Bills win. Buffalo routed the defending champion Los Angeles Rams 31-10 in a game that was not as close as the score.

#BillsMafia gets it done at #Kickoff2022. pic.twitter.com/hOgKDiSboc

But, the 2nd half was all Buffalo Bills. After a quick three-and-out to start the 2nd half for the Rams, the Bills went right down the field. Then, they cashed in on a seven-yard touchdown pass from Josh Allen to Isaiah McKenzie.

They went right back to it on their next possession. Josh Allen led them down the field. Then, he finished off himself with a powerful run into the end zone through the future Hall of Famer Bobby Wagner.

Finally, Allen had his best throw of the night on this bomb to Stefon Diggs to put the Bills up by a final score of 31-10.

No quarterback moving that fast had successfully made a throw that far in the statcast era.

Josh Allen’s 13.6 MPH at the time of throw on the TD pass to Stefon Diggs is the fastest a QB has been running on a completion of at least 50 air yards in the Next Gen Stats era, since 2016.

Jalen Ramsey was one of the biggest disappointments Thursday night. He is taking a lot of heat on social media.

Josh Allen’s 13.6 MPH at the time of throw on the TD pass to Stefon Diggs is the fastest a QB has been running on a completion of at least 50 air yards in the Next Gen Stats era, since 2016.

It didn’t help Ramsey’s case that he had said some not-so-flattering things about Josh Allen before.

“I think Allen is trash. I don’t care what nobody say. He’s trash. That’s a stupid draft pick to me. We play them this year, and I’m excited as hell.”

But on the Bills’ side, most of the NFL was commenting on just how much of a freak Josh Allen is.

I’ve seen a lot of football games in my life.

But I don’t think I’ve ever seen someone like Josh Allen with my own eyes. There are no words for this.

It remains to be seen if Allen can play at this level all season. But, if he does, the rest of the league has a big problem on their hands.