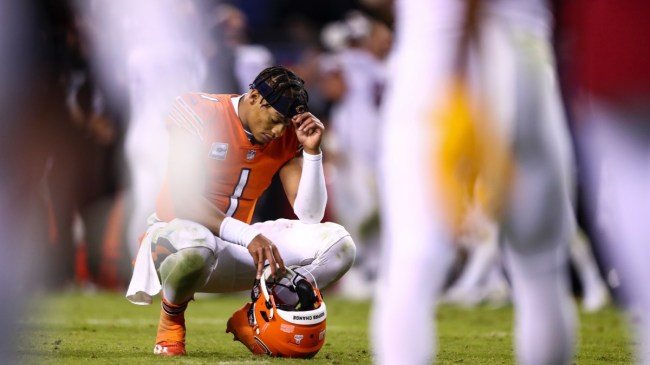 Season-long Thursday Night Football has been a thing in the National Football league since 2014. And, it’s had its ups and downs, with some classic games on Thursday night, and some not-so-classic games. After all, many times teams are playing just three days after playing a previous game. That’s a really short turnaround for a football team.

And, this year, it seems like the football on Thursday nights has been especially bad. We all thought we would never see a game worse than the Indianapolis Colts’ 12-9 win over the Denver Broncos in week 5. But, Week 6’s matchup between the Washington Commanders and Chicago Bears may have somehow found a way to be worse.

In a game involving two of the league’s worst teams, expectations weren’t high. Yet somehow, the game found a way to be worse than even the biggest sadist could possibly imagine. It was 3-0 at halftime, which was somehow compounded by what happened at halftime. There, Taran Killam bombed a comedy set of some sort poking fun at the league in various ways.

Things were so bleak in that first half that Pointsbet gave any bettor who had the under 38 total their win with 30 minutes left to play.

This is hilarious. @PointsBetUSA has paid out everyone who took the Under of 38 before halftime.

The 2nd half wasn’t much better. Yes, there was some more scoring, but it was mainly due to bad football. Even the end of the game was just putrid.

After the Commanders forgot that Bears’ quarterback Justin Fields was the worst pocket passer in the league and that if they just spied him he couldn’t move the ball, a long run by the former Buckeye gave the Bears first and goal with a chance to win the game down 12-7 with under a minute left. Naturally, the Bears dropped two touchdowns to lose, and Washington got the Thursday night win.

This was the fourth down play to Darnell Mooney. While technically a catch, if he catches it cleanly the Bears win the football game.

HOW DID DARNELL MOONEY BOBBLE THIS??? pic.twitter.com/PIZbcnpdAw

All in all, just terrible football.

The game was universally panned by those who watched

One bright spot was the great picture quality by Amazon prime.

Gotta say, Amazon made sure TNF looks pristine despite the games being terrible. It's like looking at a 24-megapixel photo of the inside of a festival porta-potty

At one point this was somehow a real stat. I feel like a lot of college teams would score more than one out of forty-five drives.

At least next week we might get a Taylor Swift single ahead of her new album coming out next Friday.

The NFL prime announcer mentioned some Midnights and Taylor Swift references and told us to check out Thursday night football next week for the premiere of "something special"???? OH MY GOD