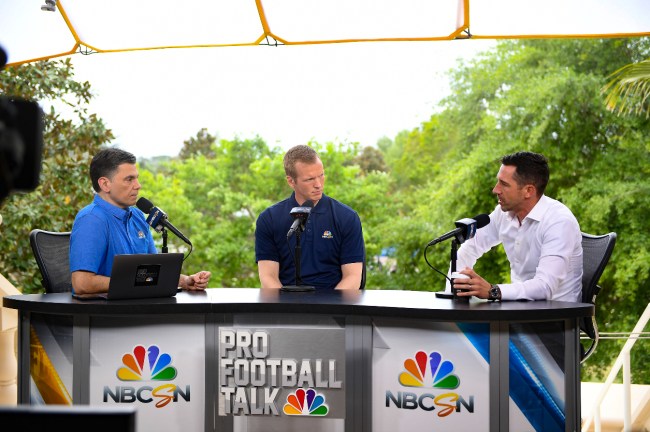 Chris Simms just keeps on burning bridges. The NFL analyst ranked his Top 40 quarterbacks in the NFL, and his rankings are not going over well with the fanbase.

He had Josh Allen as the best in the NFL — which is definitely an argument to be made — followed by Patrick Mahomes, Justin Herbet, and then Joe Burrow.

There is no secret that Allen, Mahomes, Herbert, and Burrow are among the best signal-callers in the league — and the future of the NFL. However, there are two obvious names missing from this list.

Chris Simms Must Have Forgotten About Tom Brady And Aaron Rodgers

Yes, this is really Simms’ ranking.

Simms has Brady at No. 8, behind Russell Wilson, Matthew Stafford, and Rodgers. The Green Bay Packers QB drops in at No. 5, and fans weren’t thrilled one bit.

It’s pretty insensitive that this is the way we find out that Aaron Rodgers died. https://t.co/tpOqLjNjzp

This is so media.
I don’t see Tom Brady or Aaron Rodgers. https://t.co/7RCs8tZk4S

@CSimmsQB was a trash QB and a fool. It’s like listening to Trent Dilfer all over again.

What has any QB done to be placed ahead of Mahomes at this point? Honestly https://t.co/W8uhZxbhq6

Yeah, Allen is a superstar, Mahomes is terrific, and Burrow and Herbert are the future faces of the NFL.

But, how are Rodgers and Brady not in the top four? Seriously, those are two future Hall of Fame gunslingers and, until they retire, they aren’t slowing down one bit.

Simms might want to consider taking these rankings down, and quickly.