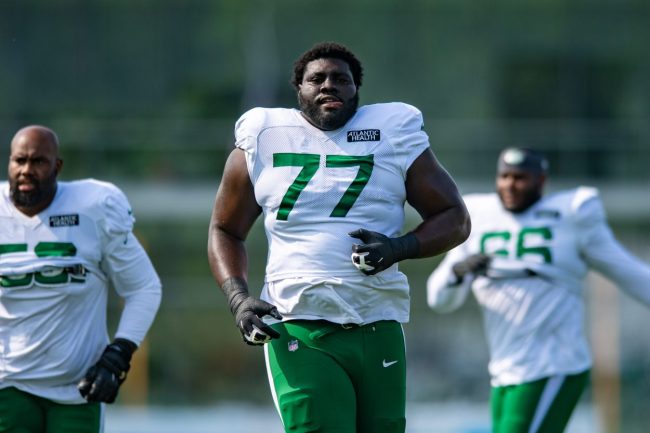 Mekhi Becton hasn’t had the easiest go of things since being drafted by the New York Jets with the 11th pick in the 2020 NFL Draft.

The absolutely gargantuan tackle had a solid showing as a rookie season but struggled at times in pass protection. He then suffered a knee injury in the first game of the 2021 season. The Jets initially expected Becton to miss 4-6 weeks following surgery, but issues with rehab and Becton allegedly struggling to keep his weight under control kept him out for the entire season.

Becton is now back healthy, although questions about his weight and playing condition still remain. New York has also moved the Louisville product from left tackle to right tackle in an effort to make him more comfortable. George Fant, who joined the Jets in free agency in 2020, will start the season at left tackle.

Whether it’s at left tackle or right tackle, there’s no denying that Becton is a force when he gets his hands on defenders. That was extremely evident on Wednesday morning at Jets ‘training camp when he sent an assistant coach tumbling to the ground with one hand.

The hilarious accident was part of a drill and Becton immediately offered the coach help up. But it just goes to show the immense strength that the 6-foot-7, 364-pound tackle possesses.

Football fans across Twitter cracked up over the encounter.

If that’s what Becton can do with one hand, I wouldn’t want to be an NFL defender that allows him to get two hands on them. That’s a big, baaaad man.