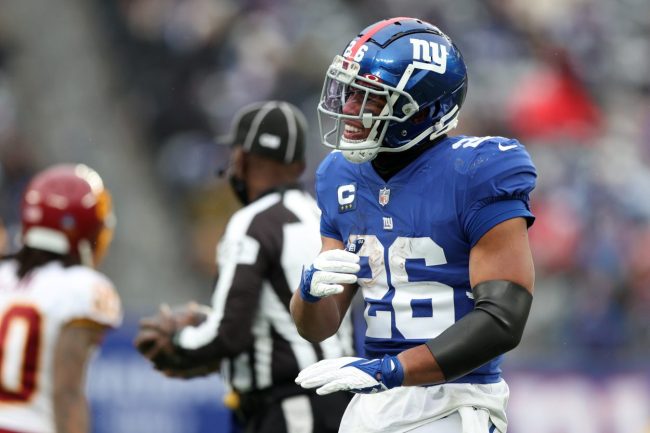 Things have been…not great for the New York Giants and their fans of late. The organization hasn’t made the playoffs since 2016 and the Giants are just 22-57 over the last five years.

But things may be starting to look up. Longtime and oft-criticized general manager Dave Gettleman retired and was replaced by former Buffalo Bills assistant GM Joe Schoen. The team also fired head coach Joe Judge after a disastrous two-year experiment. Schoen then hired Brian Daboll, who followed him over from Buffalo

Then there’s the matter of star running back Saquon Barkley. The superstar is back healthy and looks absolutely shredded. Barkley says he has his swagger back, even if he lost a ton of money in crypto.

But the best news of the offseason for New York Giants fans may have come Wednesday morning. The team announced that it’s bringing back iconic 1980s and 1990s uniforms for a pair of games in 2022.

Ask & you shall receive 😏 pic.twitter.com/OOrIHDr8k8

That includes their famed “GIANTS” helmets.

Jordan Raanan reports that New York will wear the uniforms on Oct. 2 against the Chicago Bears and Dec. 4 against the Washington Commanders. Raanan also says the team will have other game-day events celebrating the era.

Giants fans asked for the team to bring back the famed uniforms. Now that they’ve got what they want, the reactions were overjoyed.

Too bad it took almost a decade of asking for a good GM and coach. These are straight 🔥🔥🔥 tho. #nyg https://t.co/wYW7GE8Eor

Brighter days appear to be ahead for the Giants. Schoen, Daboll and Barkley may lead the way. But 2022 first-round picks Evan Neal and Kayvon Thibodeaux could also play a role. Even if the results don’t turn around, at least New York is sure to look good while losing.