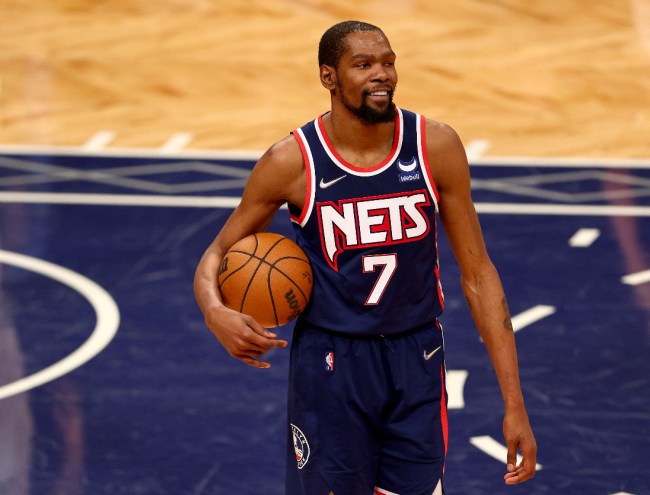 Brooklyn Nets star Kevin Durant has requested a trade from the franchise. Yet, there has been no serious traction on a deal, and a recent report states that Durant has ‘gone dark’ altogether.

So, when does Durant get traded? Or does he get sent away at all? Nobody has any idea, but the cost will likely be a monster package, especially after seeing what Rudy Gobert went for.

The Minnesota Timberwolves kicked the tires on a trade for Durant. But, the reported package for the superstar was an outlandish amount.

REPORT: The Brooklyn Nets asked the Minnesota Timberwolves for Karl-Anthony Towns, Anthony Edwards, and 4 draft-picks in exchange for Kevin Durant.

According to Chris Haynes and Vince Goodwill of Yahoo Sports, the proposed deal included FOUR picks AND Karl-Anthony Towns and Anthony Edwards. That sure seems like a lot of assets, although the Timberwolves might have done that to themselves after acquiring Gobert for a monster amount from the Utah Jazz.

If this is what the Nets are after in a trade for Durant, it might be a long time before they find a suitor. Is it reasonable? Perhaps. Is it a lot? Yes, but then again, it’s Durant.

Still, there aren’t many teams that can offer more than this, and the Nets might have no choice but to keep Durant around until a suitable trade pops up.

The Nets quickly got roasted for such a high asking price, even if it is just for an MVP-caliber player.

If this is true, I don’t think Durant will be moved anytime soon if he’s moved at all…lol https://t.co/de9uQIcDQY

Lmfao I want some of whatever the Nets are drinking or smoking because what ???

He is staring year 16 and has been hurt off and on for 4 years.
He is not worth all of that.

Y’all really saying this a steal for Minnesota? Y’all must be crazy KAT is a all nba player and one of the best shooting big men in the league and can easily get you 25 points and about 10 rebounds and Edwards is well on his way to being a superstar in this league.

The Nets might not have very much leverage. If they can’t find a partner and Durant is back in 2022-2023, it could be another drama-filled season, especially since he requested a trade.