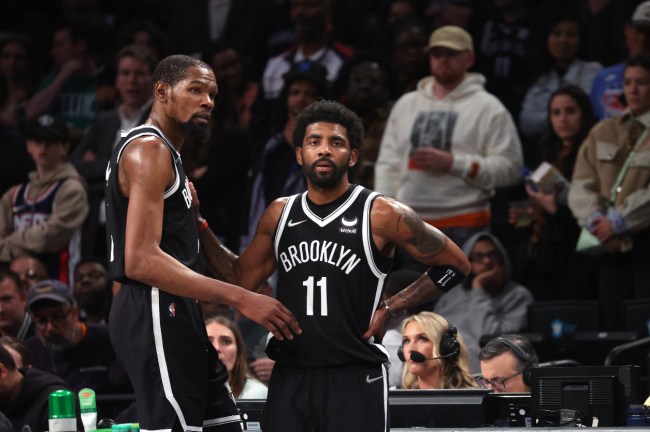 Just a couple of weeks, it looked unlikely that Kyrie Irvin and Kevin Durant would play together for the Brooklyn Nets. However, times have changed quickly, and Durant’s insistence on remaining in Brooklyn means they are running it back.

Irving’s destination appears to be Brooklyn as well, at least for one more year. So, we get a Ben Simmons-Kyrie Irving-Kevin Durant for the 2022-2023 NBA season, barring any unforeseen circumstances.

Durant and Irving were seen practicing together, and Nets fans sure took notice of this wonderful sight.

Kevin Durant and Kyrie Irving putting in that offseason work 😤

The Nets will definitely be a threat in the Eastern Conference with these guys around. Furthermore, both the players and the front office have a tough task ahead of them with all of the pressure mounting.

Fans are thrilled at the sight of these two together.

Run it back @KDTrey5 @KyrieIrving 🏆

Irving seemed destined to be traded to the Los Angeles Lakers. However, it looks like he isn’t going anywhere, either, and the Lakers pipedream might have to wait until the next offseason.

Both players seem ready to put it behind them and move on. Both players look like they now want to be there and aim for a title. However, anything could change and quickly. For now, enjoy the Durant-Irving duo.