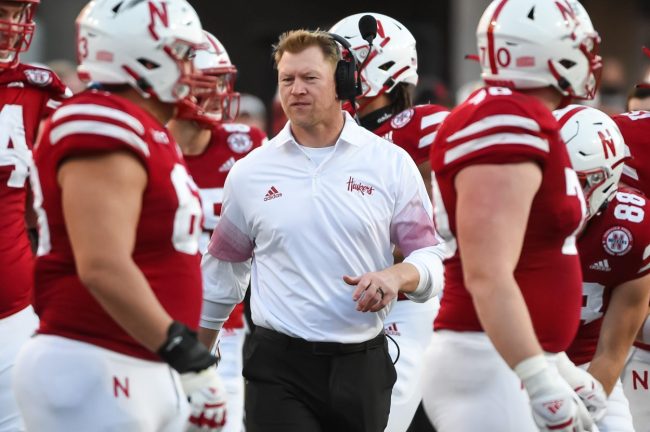 Nebraska head coach Scott Frost stuck his foot in his mouth last week when discussing his offensive linemen and their new conditioning regiment.

Frost bragged to the media that new offensive line coach Dominic Raiola had his unit throwing up “15 to 20” times each practice. Obviously, that would extremely unhealthy if true, and fans immediately laid in to Frost for being either hyperbolic or extremely unsafe.

Unsurprisingly, Frost had to walk back those comments over the weekend

Via the Omaha World-Herald:

Frost said he “might have exaggerated” on how often Nebraska’s offensive linemen had been vomiting in practice. On his monthly radio call-in show, Frost jokingly estimated it was 15-to-20 times per practice, drawing criticism from national media out of concern that Frost didn’t care enough about his players’ well-being.

“Our training staff and weight staff of keeping me abreast of everything going on in practice,” Frost said.

Frost’s time in charge of his alma mater has largely been a disaster. He’s 15-24 in four season, with a 5-7 record in 2019 marking the high-water mark.

Frost appears unbothered by the noise and living life headed into the new season. The Huskers captured a glimpse of this on their Twitter page Monday night.

5/10 on the railing slide. Frost never really gathered speed and jumped off before even reaching the end. But Nebraska fans loved the clip.

How I’m going to look Saturday morning after the show to watch the #huskers win! #GBR 🌽 https://t.co/JcC1uTPxvf

We have some questions, however. First and foremost, how did someone know to film this moment? Did Frost know the cameras were on him? Is this an every day deal?

Maybe Frost is just pumped for the season opener. Nebraska travels to Ireland this weekend and starts the Big Ten season on Saturday against Northwestern.