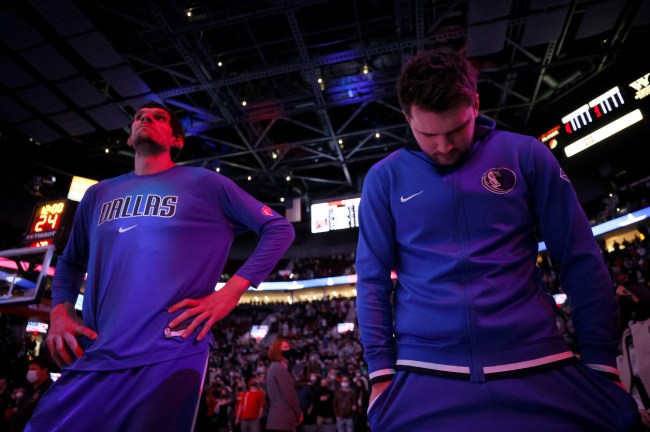 The NBA Draft is right around the corner, and Wednesday night gave the league the first big trade prior to draft night. The Houston Rockets traded Christian Wood to the Dallas Mavericks in exchange for the No. 26 pick in the 2022 NBA Draft and a few players — Sterling Brown, Trey Burke, Marquese Chriss, and Boban Marjanovic.

So, basically, the trade is Wood for the first-round choice, and the Mavs get a quality big man to pair with Luka. However, this trade didn’t go over well with loyal Mavs fans, and surely Luka himself is a bit saddened to see his friend, Boban, go to another Texas team.

The NBA world quickly pumped out a number of memes, gifs, and funny moments from the two — and the Luka-Boban pairing is no more in Dallas, at least for now.

Luka Doncic and BFF Boban Marjanovic will have to go their separate ways due to the recent trade involving the Mavs and Rockets 😭 pic.twitter.com/zZzzvuobsd

Luka Doncic after seeing that Boban got traded to the Rockets pic.twitter.com/HcNplKeNYO

BREAKING UP THE BOBAN LUKA BROMANCE WHAT THE HELL IS THE POINT OF THE NBA https://t.co/lXuNR6F41L

have they considered it's legally not allowed to separate luka and boban https://t.co/oTegMLzCSL

THEY GAVE UP BOBAN.

Luka going to his room after seeing the news https://t.co/rmKbnj6xA0 pic.twitter.com/ocgHF7nEWE

However, deep down, Luka has to be ecstatic about adding Christian Wood to the team. This Tweet sums it up perfectly.

When Luka see Christian Wood at the Mavs facility pic.twitter.com/i2UDKqc5IS

Sure, the Luka-Boban pairing is no more, but the Mavs got a whole lot better by bringing Christian Wood to the team, and who knows, maybe Mark Cuban has other tricks up his sleeve after the Mavs lost in the Western Conference Finals.

It will be weird not seeing Luka Doncic and Boban Marjanovic in the same locker room. Although, maybe Boban finds his way back to the Mavericks at some point.