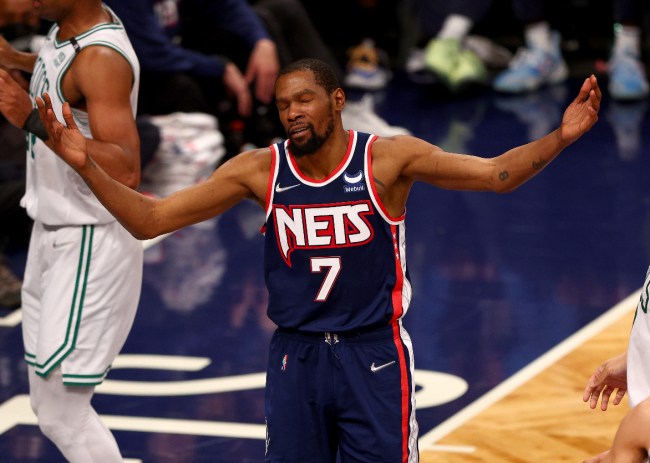 There it is. Just days after Kyrie Irving decided to opt-in with the Brooklyn Nets, Kevin Durant has shockingly requested a trade, according to Shams Charania of The Athletic.

Kevin Durant has requested a trade out of Brooklyn, sources tell @TheAthletic @Stadium.

This definitely comes as a major surprise, especially because Kyrie opting in basically gave everybody the assumption of a KD-Kyrie reunion. However, that isn’t the case, and Durant has the Phoenix Suns and Miami Heat as preferred options.

Phoenix and Miami are among two of the teams that Kevin Durant has on his wish list, sources tell ESPN, but the Nets plan to move Durant where they can get the best possible deal. With four years on his contract, there's no shortage of teams willing to unload assets for Durant.

Durant going to either team would be a massive move, although the Nets are looking for a massive deal to unload him.

With news this big, the NBA world went absolutely bonkers as Kevin Durant goes to another team to chase an NBA title.

It’s been a tough, tough year for the Nets but man, this is the biggest blow in franchise history. https://t.co/ZYr9xFB4Nj

Can always count on the NBA for the drama lol https://t.co/QXwkQH9C7V

Normal people keep the world going, but those who dare to be different lead us into tomorrow. https://t.co/5L6o30yqfu

Of course, Portland trail Blazers fans are getting ahead of themselves. It doesn’t help that Damian Lillard got everybody started by posting an interesting picture of him and KD together recently.

So, for now, the Suns and Heat seem to be the preferred destinations. With this decision, who knows what happens with Kyrie Irving.

But, once again, the NBA steals the spotlight. Kevin Durant watch is on. AGAIN.