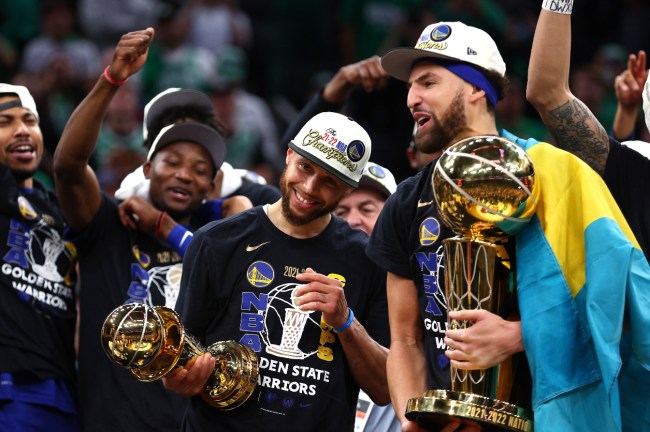 The Dubs took care of the Boston Celtics in Game 6 on Thursday night behind a 34-point effort from Curry, including six three-pointers after failing to hit one in Game 5.

After the game, the award came, and Curry finally received the prestigious honor. More than that, he was a unanimous selection.

For as stellar as Curry’s career has been, there was one thing missing — an NBA Finals MVP. Well, not anymore.

It is clearly a well-deserved honor for Steph, who put together four games of 30 or more points, including a 43-point outburst in Game 4. This decision was evident, and NBA Twitter — including fans and players — were quick to give Curry his moment in the spotlight.

Unanimous. As he should have. An all-time great that deserves all the flowers. https://t.co/XjmcJJCoxN!!

The NBA players — both past and present — gave Curry his props.

Don’t talk about Steph again unless it’s in a convo with the time great PLAYERS!! And i mean a hand full of people to ever touch a basketball.

Soak it in, Steph!

Golden State Warriors and their MVP Stephen Curry celebrate their 4th NBA Championship in 8 years after a 103-90 win over Boston Celtics in Game 6 of NBA Finals. @sfchronicle photos by @ScottStrazzante pic.twitter.com/Hh0gEhMfdZ

The Warriors are the 2021-2022 NBA Champions, and Curry will remember this night for a long time. To top it off, here’s Steph’s Tweet.