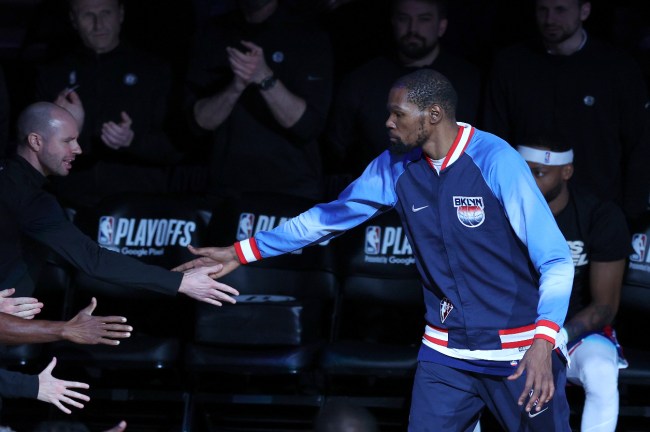 Ladies and gentlemen, the Kevin Durant Sweepstakes is officially over.

After months and months of discussions and a neverending flurry of trade rumors regarding Durant, the Brooklyn Nets ownership and Durant met in Los Angeles and reportedly decided to stay together. This came through a bombshell report from Adrian Wojnarowski of ESPN and an official release from the Nets.

The Kevin Durant trade discussions are over, the Nets say. He’s under contract for four years. https://t.co/Xnwk4rPW8q

There it is. Durant is reportedly staying in Brooklyn for four years with the intent to play out the remainder of his contract.

After the Phoenix Suns signed Deandre Ayton, it became highly unlikely that any team would pay the enormous price tag for Durant. Furthermore, Kyrie Irving has also not been dealt yet, and it seems the Nets might run it back once again in 2022.

The NBA world is stunned at this news, and Nets fans specifically can breathe a sigh of relief.

Finally. Skip the drama. Back to ball. #Nets https://t.co/7iEhsycvm0

Nets are now loaded and should win the championship if they can stay Healthy https://t.co/NEFsbPqdTj

The real question remains: Will Durant really stay with Brooklyn? It could be only a matter of time before he requests a trade.

Guess we’ll wait till next offseason to do it all over again https://t.co/0G1Q6340pa

The most recent trade rumors included the Memphis Grizzlies and the Boston Celtics. But nobody is landing Durant, and we can only imagine what this season will be like with two disgruntled players who expressed a desire to play elsewhere.

It should be a fun season in Brooklyn.