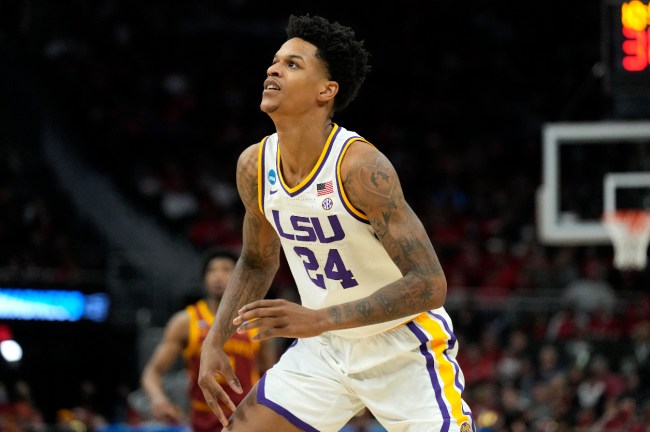 Shareef O’Neal has been tied to his father’s legacy for a long time. Now, after deciding to leave LSU early and turn pro, he faces a lot of uncertainty with the 2022 NBA Draft taking place on Thursday.

Will Shareef O’Neal end up being drafted? Or will he try to sign an undrafted free agent deal and attempt to perform well in the Summer League?

That remains to be seen, but Shareef revealed some public beef with his father, NBA legend Shaquille O’Neal, over his decision to leave school early and head for the NBA realms.

Shareef O’Neal Reveals Some Beef With His Father

Things got even more interesting regarding Shareef heading into Thursday’s NBA Draft.

Shareef: "I'm not backing down from nobody. I know he's an NBA legend, I know he's my dad, but it was right in front of me, I had to go get it. So, if he likes it or not, it's not really gonna stop me from doing what I want to do." https://t.co/HwD75qRPAI

Shareef definitely has his work cut out for him. This past season, he played a limited role with the LSU Tigers, averaging just 3.1 points and 2.2 rebounds in 14 games. He played in just 10 games the year before and averaged 2.8 PPG. Then, in 2019 at UCLA, O’Neal averaged just 2.2 PPG.

Sadly, he never got into a rhythm, and a flurry of health issues has limited his time on the court in every collegiate season. The health issues include open-heart surgery during his time with the Bruins, although he made a full recovery and was able to get back on the court, thankfully.

He then had foot issues in his sophomore season and struggled to find playing time. All in all, Shareef faces an uphill battle and is unlikely to hear his name called on Thursday night.

But, on the other hand, he has gone through a series of workouts, including a recent one with the Los Angeles Lakers on Tuesday.

Let’s see if Shareef made the right decision or if his father had the right idea about him finishing school.