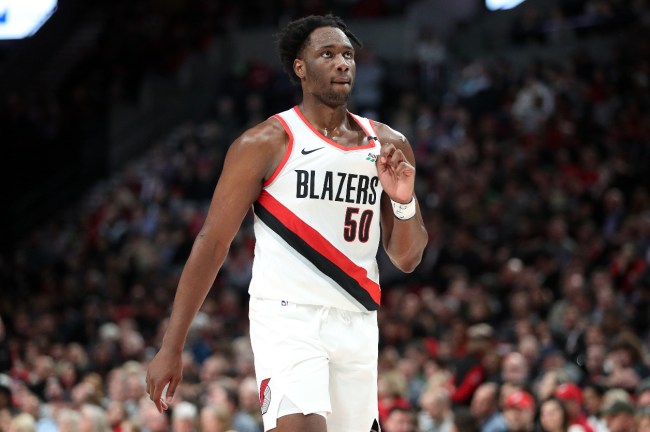 Former Purdue basketball star Caleb Swanigan passed away at the age of 25, his alma mater announced early on Tuesday morning.

Our thoughts and prayers to Caleb Swanigan’s family and friends. The world lost a gentle soul last night.

Swanigan compiled a long list of honors during his impressive career at Purdue, including Big Ten Player of the Year (2017), the Lute Olson Award, Pete Newell Big Man Award, and a consensus First-Team All-American.

He wound up being selected by the Portland Trail Blazers with the 26th overall pick in the 2017 NBA Draft, but unfortunately never found his rhythm in the NBA.

He spent time with the Blazers and with the Sacramento Kings but hadn’t suited up for an NBA game since the 2019-2020 season and chose not to play during the bubble season.

The news of Swanigan’s passing was a tough one for everybody, especially for those that spent time with him. Purdue head coach Matt Painter posted a brief message on Twitter, and others that knew Swanigan followed with similar sentiments.

Terribly saddened by this. Biggie had a positive influence in everyone’s life. Was such a thoughtful person and gentle soul who had to overcome so much in his life.

He will be greatly missed. https://t.co/Ivm5MiaCUm

This is sad to hear. We played against each other in college and together while in Sacramento. This is devastating. I’ll miss all the jokes and laughs we shared. https://t.co/sGZnXZjCFI

Caleb Swanigan cutting down the net in 2017. I’ll never forget this night, the ‘16-‘17 ⁦@BoilerBall⁩ season or Biggie. Such a sad day pic.twitter.com/VUYrzKRKPO

Sending our thoughts and prayers to the Swanigan family ❤️

Others also honored Swanigan, including a flurry of NBA players and some of his former teammates.

My thoughts and prayers to Caleb Swanigan’s family 🙏🏻 https://t.co/IHMGWTAWcw

The Trail Blazers and Kings also posted a message on Twitter after the news came out.

We are heartbroken by the passing of former Trail Blazers player Caleb Swanigan. Our thoughts and prayers are with Caleb’s family, friends and all who loved him.

We are deeply saddened to learn of the passing of Caleb Swanigan. He will be remembered as a great teammate and friend. Our hearts are with his family during this incredibly difficult time. pic.twitter.com/JHdzX00JrV

Thoughts and prayers are with Caleb Swanigan’s family and friends.