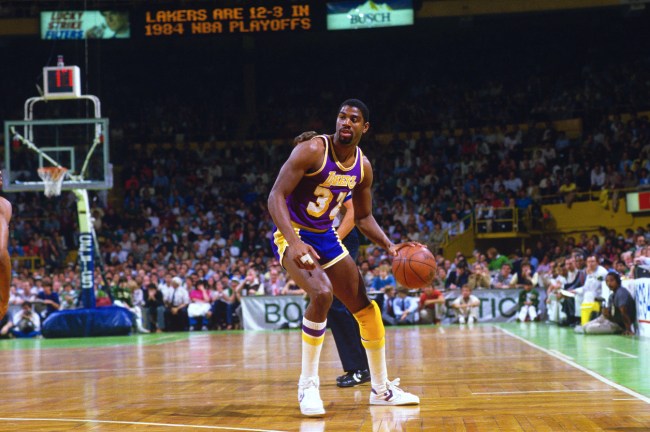 NBA legend Magic Johnson continues to make headlines in the sports world. As Johnson announced via his Twitter page, the former Los Angeles Lakers superstar has now decided to join forces with the fast-growing NFT industry and is partnering with NBA Top Shot.

NBA Top Shot stole the show when they dropped initially and have continued to bring in high-profile names, such as Kevin Durant, last year. Michael Jordan and Klay Thompson have also invested in Dapper Labs, the company who runs Top Shot.

But, Johnson’s moments should be worth a ton, mainly because of the historical name value behind him and the Showtime Lakers.

June 7 is the official launch date for Johnson’s first-ever NFT, and the NBA Top Shot community is buzzing with excitement, per their official statement on their website.

“We are thrilled to partner with the all-time great himself, Magic Johnson, to bring a whole new historical decade to the Top Shot community … There’s no more iconic player to tip off the 80s with than the 6’9” point guard out of the State of Michigan who took the league by storm.”

Some of Johnson’s moments will have a mint count of 32 — his number that is hanging in the rafters of the Staples Center — and the throwback moments might be able to captivate a whole new age of consumers and collectors.

There will be plenty of iconic moments throughout Johnson’s treasured career during this new chapter for NBA Top Shot, and the NBA legend will be hosting a Twitter spaces AMA on May 31 to kick off this new career venture and answer questions anybody might have.

This could be the first of a new era of the NFT movement, and perhaps other retired legends will ink deals with NBA Top Shot and other platforms of that nature.