NBA Finals Hit By COVID On The Broadcaster Front 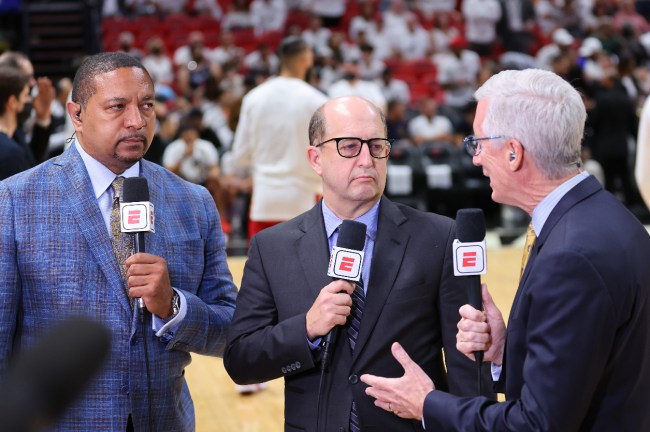 Game 1 of the NBA Finals between the Golden State Warriors and Boston Celtics is going to be a little bit different. However, not because of the players on the court. Instead, it will be due to an absence of at least two media members — and potentially a third.

According to Andrew Marchand of The New York Post, both Jeff Van Gundy and Adrian Wojnarowski will be absent from Game 1 with COVID.

On top of that, it remains to be seen whether or not Mike Breen will be calling Game 1 as he too was also waiting to be cleared from the COVID list.

Who will replace Jeff Van Gundy for the first game of the NBA Finals?

Woj is a big loss indeed, and so is Van Gundy. The lead analyst for ESPN seemed hoarse as he called Game 7 of the Eastern Conference Finals.

Heat Celtics Gane 7 was viewed in 12 percent of Dade Broward homes with TV sets, comparable to Fins games…Jeff Van Gundy, who sounded sick Sunday, out ot Game 1 tonight with covid..So Mark Jackson tonight with Breen (if he gets out of covid protocols) or Mark Jones otherwise.

With Van Gundy out, it will be Mark Jackson — the former Warriors head coach — and either Breen or Mark Jones.

The hope is that COVID won’t play a factor in the NBA Finals, but the fact that a trio of media members are dealing with COVID is not encouraging whatsoever.

Breen could be available for Game 1, but he had not yet been cleared as of Thursday morning. Van Gundy and Woj are both hopeful that they can return for Game 2.