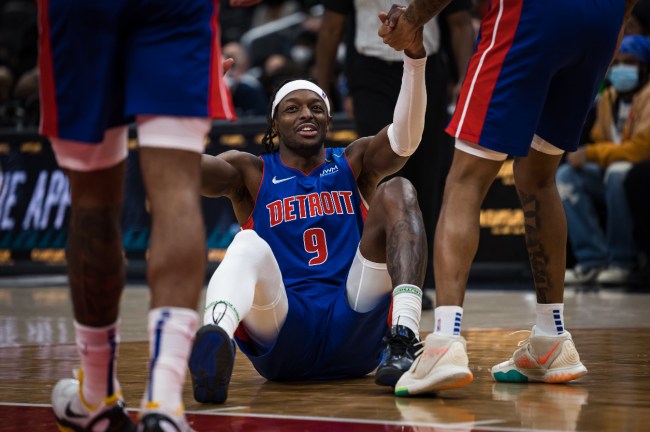 Well, there we go.

The Detroit Pistons and Portland Trail Blazers are kicking things off with the 2022 NBA Draft almost here. On Wednesday, the Pistons sent Jerami Grant to the Blazers for a 2025 first-round pick, according to Adrian Wojnarowski of ESPN.

Oh, and the first-round pick in 2025 belongs to the Milwaukee Bucks, so we can only assume it will be a late draft selection.

The Grant rumors had been going on for quite some time and the Pistons finally unload him in hopes of signing one or two marquee free agents this offseason.

However, they should have been able to get more, and NBA fans are not thrilled about this small return.

This was a cheap deal for the Blazers. A first-round pick THREE years from now, and one that belongs to one of the best teams in the NBA, at that.

NBA fans weren’t afraid to share their thoughts (when are they?)

LMAOOOOOOOO AND PISTONS FANS THOUGHT GRANT WOULD GET THEM THE 4th💀

That’s all it took? Yeah y’all overvaluing a lot of these 3rd option/rotational players. https://t.co/ZE3JginEz3

Jerami Grant swapped for what is essentially a second round pick in 2025.

If the Christian Wood trade was a steal, this is a bank robbery https://t.co/PlPaZxjtHt

no matter how you rate Jerami Grant, getting an established player for a protected first (from a good team) is just good business https://t.co/pS3blLZdYz

Of course, the Pistons must have something else planned, otherwise, this looks even worse.

My take: This feels like an appetizer to Detroit throwing the max at Deandre Ayton. https://t.co/TrIi5yZK9A

Seems like the trade here for Detroit is incomplete until we know what they use this cap space for. Seems pretty clear they prioritized clearing Grant’s money as opposed to maximizing the pick value they could have received back for him. https://t.co/1HEpQBdnEq

Well, there you have it. The first big trade is Jerami Grant to the Blazers for a massive steal. Let’s see what happens next.