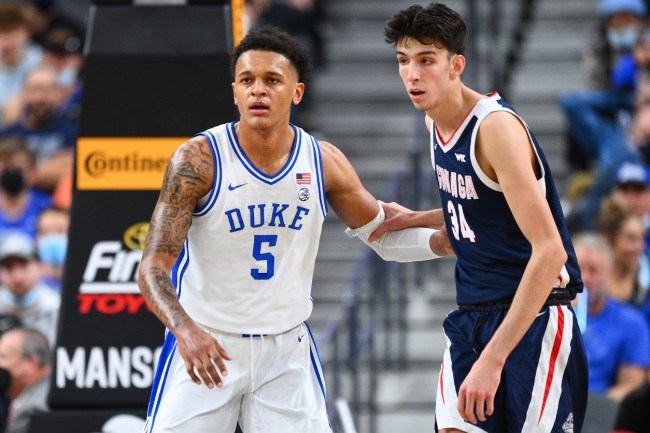 The Orlando Magic stunned everybody by selecting Paolo Banchero at No. 1 overall. But, he showed every bit why he is the top player with an impressive Summer League debut.

No. 2 pick Chet Holmgren also had a stellar debut, and everybody circled their calendars for the Magic-Thunder game on Monday, July 11.

The battle between Banchero and Holmgren, 1 vs. 2, is what everybody wanted. Unfortunately, that is canceled since the Magic decided to sit Banchero for the remainder of the Summer League.

Paolo Banchero’s Summer League is over. Put simply, the Magic saw all they needed to see from the No. 1 pick and want other players to get opportunities now.

Chet vs. Paolo is what everybody was waiting for. But it won’t be happening — at least not in Las Vegas. NBA fans aren’t exactly thrilled with this development, either.

This dumb as hell https://t.co/scJds0w9c2

Well this is disappointing… https://t.co/hZlAIbfhzb

Are we positive the Magic live near the happiest place on earth? Cuz they just stole all our fun? 😠 https://t.co/vZonzo0pop

I normally don’t get mad at load management like some people but this is ridiculous https://t.co/B7lMXdoxPY

Summer League load management is not the business for the fans, but the Magic clearly saw all they needed to. Also, Banchero was limping after the last Summer League contest, so there could also be some reasoning there.

Magic rookie Paolo Banchero walked away from his postgame interview with a noticeable limp and asked to see a trainer, who tended to his ankle. pic.twitter.com/cUsUnUC0L2

So, it looks like everybody will need to wait until the regular season to see Paolo and Chet face one another. Banchero already got the better of Houston Rockets rookie and No. 3 overall pick Jabari Smith Jr. in the Summer League.

Nonetheless, Paolo Banchero vs. Chet Holmgren was what we all wanted. Sigh. Still, it should make for good television, and Holmgren is a treat to watch.