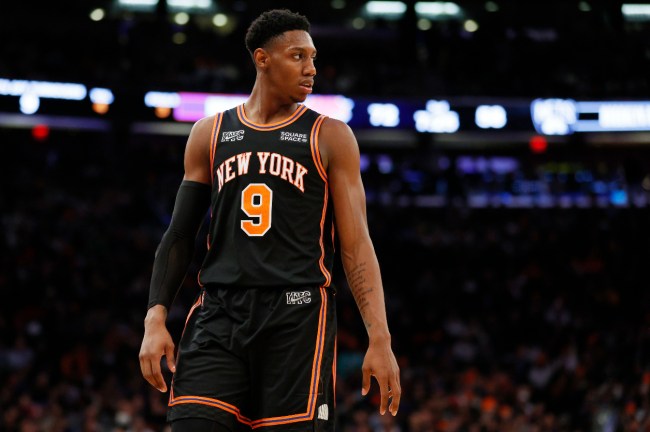 The New York Knicks continue to surprise everybody around the NBA world. They started off the offseason by giving Jalen Brunson a $100+ deal. Now, Brunson is a solid player and can flourish in a full-time starting role, but that move was heavily criticized all around.

Then, the Knicks flirted with a Donovan Mitchell trade before backing out of the desired asking price.

That is a ton of cash, and Barrett has now made history for the Knicks in a surprising way.

Barrett’s extension – which makes him the youngest $100M player in Knicks history at 22 — ends weeks of New York/Utah trade talks on Mitchell, and forces teams to start discussions over with significantly different deal parameters because of the Poison Pill provision.

Barrett is the youngest Knicks player to earn $100 million. It’s not that he isn’t good. Not at all. But, this basically takes the Knicks out of the Mitchell sweepstakes, and fans aren’t too thrilled about it.

Leon Rose got so sick of Danny Ainge asking for RJ, he extended Barrett and took him off the table. https://t.co/fXWL0KolVD

A guy who shoots below average from every distance on the court gets 30 mil a year, laughable. https://t.co/bxeSkma246

The reactions are mixed, although a decent amount of Knicks fans are on board with this contract for Barrett, especially since the first-round curse is officially broken.

RJ Barrett is the first Knicks' first-round pick to sign a multi-year deal with the team since Charlie Ward.

The curse has been broken. pic.twitter.com/Eg4BrmpNeA

Nonetheless, Barrett has a lot to prove, even more with this massive dollar amount tied to his name. Let’s see if this pays off for the Knicks or not.