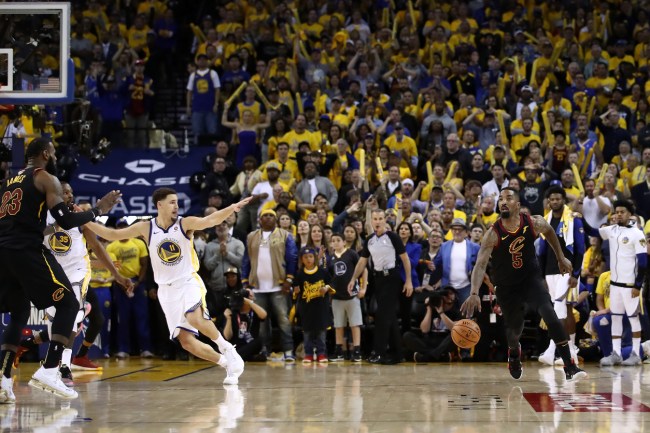 The 2022 NBA Finals are set and the Golden State Warriors and Boston Celtics are going to duel it out. However, fans have a few days to wait and quickly remembered that May 31 is the anniversary of the infamous gaffe by JR Smith.

The Cleveland Cavaliers and Warriors faced off in the 2018 NBA Finals as LeBron James aimed to bring Cleveland an NBA title. However, Smith made the biggest mistake of his life with a blunder that will live on forever.

In Game 1 of the 2018 NBA Finals, Smith thought the Cavs had the lead when the game was tied. The game would go into OT and the Warriors won.

Yeah, there still isn’t a way to justify this play by Smith.

Even four years later, fans are still mocking Smith for this play — and rightfully so.

The most frustrating night ever.

will never forgive him. https://t.co/2Diqi7tHFX

Jr had me going through it for a min after this. https://t.co/3laZObPKrM

On the other hand, some fans actually didn’t blame him then and still are holding true to that sentiment.

why people keep on blaming JR Smith for this is just ridiculous. the bench and coaching staff should have called a timeout way before JR Smith could have or should have

JR gets killed for this, but which cavs player or coach called the timeout that they had left?

Surely the blame can go around to others on the team. Nonetheless, Smith will need to live with this all-time blunder for the rest of his life, and LeBron and company must have serious flashbacks of this night.

Remember one thing: The Warriors swept the Cavaliers in four games, and if Game 1 would’ve gone to Cleveland, things just might have been different.