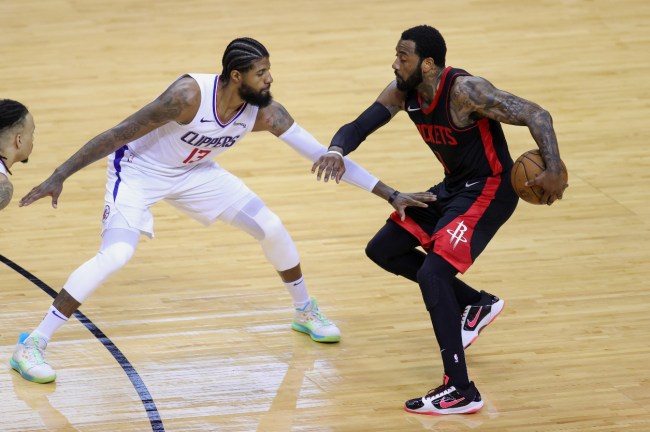 The NBA world is nonstop these days. Kyrie Irving stunned everybody by opting in to his player option with the Brooklyn Nets and committing there, essentially ending all the buzz regarding Kevin Durant and Deandre Ayton, who had some wild odds earlier in the same day.

Another domino fell on Monday night when it was announced that John Wall and the Houston Rockets reached a buyout, making him a free agent once and for all.

Then, not long after that, Adrian Wojnarowski of ESPN reported that Wall intends to join the Los Angeles Clippers.

John Wall is planning to sign with the Los Angeles Clippers once he clears waivers, sources tell ESPN.

There it is; Wall joins Kawhi Leonard and Paul George on an even more loaded Clippers group heading into the 2022-2023 season.

The NBA World Explodes After The John Wall News

Is Wall the same player he was before? No, but this is still a massive addition for the Clippers, and the NBA world reacted.

Interested to see how much tread John Wall has left on his tires. If he's 80% of what he used to be, this will be a good addition to the Clippers team. https://t.co/V9GZKzEil6

WOW! With the return of Kawhi as well, the @LAClippers have to really feel good about their core for next season. https://t.co/eHcV5XEKa8

If all healthy WCF at least https://t.co/CjmvPQnb7R

Some, however, weren’t as optimistic about the Clippers adding Wall to a roster that already has a few injury-plagued players.

Both medical staffs in LA might as well just pack it up for next year https://t.co/8hGDLljHI9

The 3 games next season where PG Kawhi and Wall are all healthy bout to be crazy https://t.co/cg0h01tSAV

Sure, there is risk, but Wall is a welcomed addition to a Clippers team who is getting Leonard back as well — and the star forward was seen taking a workout recently, although he got flamed a bit for missing some easy shots.

Last but not least, this marks the second time in a day where Lakers fans missed out — first with Irving, then with Wall, although Wall wasn’t as serious of an option.

– Kyrie staying with the Nets

The NBA continues to go nuclear, and free agency hasn’t even arrived. Who knows what is next in this book of endless entertainment.

Oh, and here’s the reaction from Paul George himself.