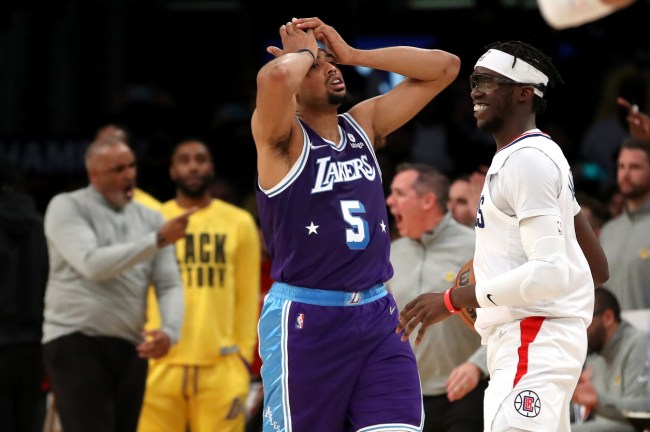 The NBA trade market has a ton of names floating around. With the Brooklyn Nets and Los Angeles Lakers apparently wanting to make a splash, one LA player who has been mentioned a lot is Talen Horton-Tucker.

This isn’t anything new, and THT’s name has circulated in trade talks ever since he came into the NBA.

Horton-Tucker’s performance at the Drew League definitely didn’t do him any favors, and it came just after LeBron James dropped a 42-point, 16-rebound double-double the day before. Unfortunately, Talen Horton-Tucker didn’t do anything like that.

THT’s team won, so that’s something to be proud of. On the other hand, NBA fans roasted THT for this disappointing outing at the Drew League.

How is this guy in the league https://t.co/DQOsikxYnm

This mf putting up his NBA numbers in drew league but less efficient 💀 https://t.co/2sZXPHNprI

This is just straight up embarrassing 🤣 https://t.co/rGVXlkhh7C

Laker fans swore up and down they had a gem on they hands https://t.co/8JS1jwF5Xd

With all the trade rumors swirling around, some even mentioned that THT’s value went way down.

He was tryna stay a Laker https://t.co/TU0ldGOzlH

At one time, THT was set to become a young, budding star for the Lakers, and they refused to trade him away time and time again. But, he has taken a backseat since then. In 2021-2022, he averaged just 10 points per game with 3.2 rebounds and 2.7 assists across 60 games.

Talen Horton-Tucker might not be a Laker for much longer, but he probably needs to mute his mentions after this frustrating performance at the Drew League.