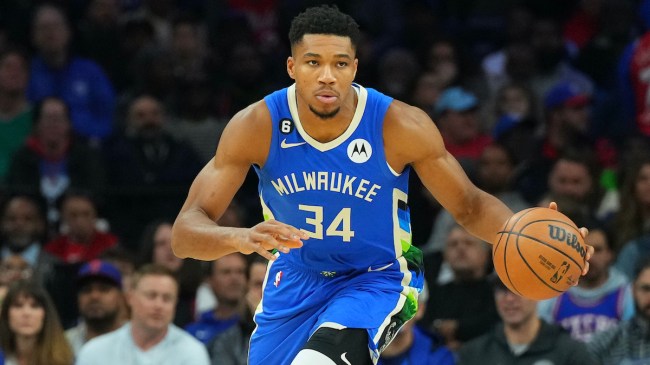 Milwaukee Bucks star Giannis Antetokounmpo had a rough night against the Philadelphia 76ers on Friday and even lost his temper in a shocking interaction with a stadium employee following the game.

The Bucks lost to the Sixers 110-102 despite getting out to a 13-point lead in the 1st quarter. Antetokounmpo finished the night with 25 points and 14 rebounds, but his struggles from the free-throw line proved costly. He went 4-of-15 and the Philly crowd let him hear it on every miss.

The poor shooting performance must’ve struck a nerve as the Bucks star wanted to work on his foul shots once the crowd cleared after the game. However, a Wells Fargo Center employee was already blocking the basket with a ladder and refused to budge.

Fan videos captured the incident and showed Antetokounmpo trying to move the ladder before pushing it over altogether.

Giannis throwing down the ladder and disrespecting the employees of ⁦@WellsFargoCtr⁩ after losing to the ⁦@sixers⁩. pic.twitter.com/DBrRu1nq7K

It was a shocking move from the 2-time NBA MVP, especially given his reputation as a well-liked player by most NBA fans. The video quickly went viral and the basketball world did not like what they saw.

Twitter exploded with disapproval of Antetokounmpo’s actions. Fans did not hesitate to call him out for the clear disrespect shown, including Kendrick Perkins.

Giannis full of shit for this!!! Real Talk. https://t.co/TsCZcPWviZ

Whether it was a bad shooting night or not, there’s no excuse for not treating the staff with due respect.

Everybody has a bad loss. EVERYBODY has bad nights.

But Giannis you CANNOT treat the arena staff this way. No matter how the game ended. It’s unacceptable. https://t.co/kPbcJKCltu

76ers’ Montrezl Harrell was still in the building when the ladder fell too. He exchanged some with Antetokoumpo while being held back by other staff.

Montrezl Harrell was not pleased when Giannis did that. pic.twitter.com/KBCUgGdC8r

There were some fans who felt the incident wasn’t all that bad though. If the worst thing Antetokoumpo does is knock over a ladder, they can live with it. Plus, one poor decision shouldn’t overrule the reputation that he’s built over the last decade.

I don't even care how Giannis is perceived anymore. He's been at the top for a while now, and at that point it's impossible to remain 100% likeable. If the worst thing he does in his career is push over a ladder when he's trying to shoot free throws after a bad game, whatever.

Antetokounmpo has since discussed the incident with reporters. While he didn’t exactly apologize, he emphasized that he meant no disrespect toward anybody. He didn’t mean to push the ladder over either and simply wanted to move it out of the way.

It turns out the 76ers interrupted Antetokoumpo’s free throw practice first, so the Greek Freak may have had some valid reasons to be upset. But hopefully, it can just all blow over soon.

The Bucks will return home to face the Portland Trailblazers on Monday. Antetokoumpo will look to overcome his shooting struggles this season. Currently, he is below his career average in all shooting categories (FG%, 3P%, and FT%) and Friday’s free throw percentage was his worst of the season.