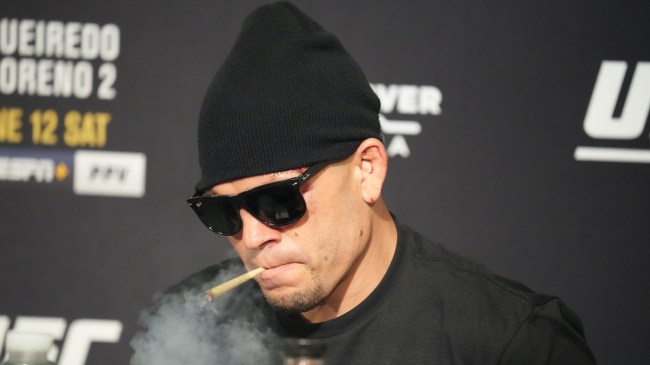 Nate Diaz is a legend in combat sports and his hilarious encounter with the United States Anti-Doping Agency (USADA) is just another reason why.

While UFC middleweight Paulo Costa had a sour experience with USADA earlier this month, it was a very different story for Diaz. USADA paid him a visit on Friday ahead of UFC 279 and was greeted in the most Nate Diaz way possible.

After failing to produce enough urine samples, the UFC welterweight hopped on Instagram Live and sparked up a blunt. But the best part might be the USADA rep unsuccessfully trying to move out of frame.

Nate Diaz not giving a fuck while USADA is trying to get more piss 😭😭😂😭 pic.twitter.com/s8FDPg6vPS

“This man won’t get out of my house because I didn’t give him enough piss,” Diaz explained. “… DK is my guy, but USADA can f*cking suck a d*ck. Come back in six hours and I’ll give you two more liters.”

It seems the moment was all in good fun while Diaz gave the USADA rep, named DK, a hard time. He even offered a hit of the blunt, which DK respectfully declined.

While the UFC has essentially removed marijuana from the banned substance list, smoking right in front of a USADA rep is still a wild sight. Of course, fans would expect nothing less from the UFC legend that is Nate Diaz.

Diaz will square up in the main event at UFC 279 against Khamzat Chimaev on September 10th. Following two consecutive losses, he’ll look to bounce back in the final fight of his UFC contract. With his future still up in the air, it very well could be Diaz’s last time sparking up with USADA.