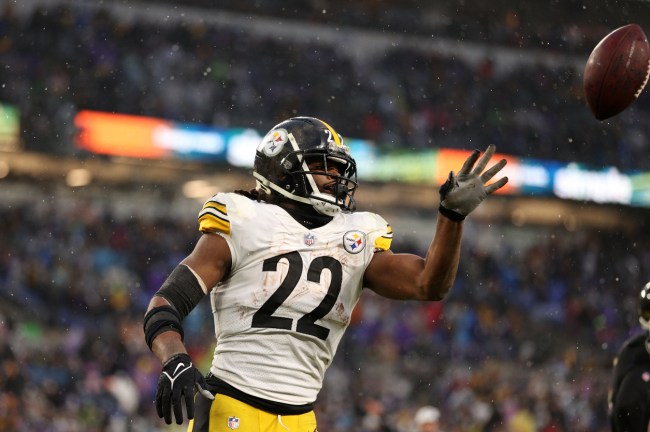 The Steelers’ workhorse RB is now listed at 244 pounds, which is impressive. But, even more impressive is how built he is.

He’s all quads and hamstrings.

Harris is ripped indeed and, according to Mark Kaboly of The Athletic, he is “all quads and hamstrings.” Yes, Harris did check in last summer at 241 pounds, but he definitely didn’t look this built.

The new era in Pittsburgh is here after Ben Roethlisberger retired, and Harris has all the tools to become the star of the show on offense.

Harris checked in attempting to do his best Jerome Bettis impression. As such, everybody noticed Harris looked built.

I’ve now seen Najee Harris’ quads with my own eyes.

And yes, they’re as impressive as Twitter made them out to be last week. pic.twitter.com/hAq4jntr8p

Najee Harris just came up to the @SteelersNRadio table to make sure @dabody52 and I know that he weighs 244 pounds. We aren't lying when we say this man is a beast. Hasn't lost a step either.

Najee Harris proceeded to rip reporters for commenting on his weight

The news of Harris’ weight quickly became a talking point for the reports.

However, Harris was not thrilled with one such Tweet and went on to rip the reports coming out from practice.

For what it’s worth, the Steelers’ official website lists Harris at 232 pounds, so there’s that.

Nonetheless, Harris has made headlines at the end of May for his unreal physique, and that should be quite frightening for the AFC North and the rest of the NFL as they try to stop one of the best young players in the game.