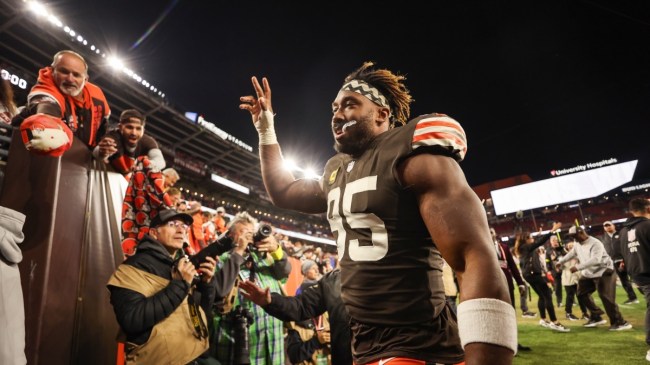 Myles Garrett has been everything the Browns could ask for after they took him with the first overall pick in 2017. He’s made three all-pro teams, was rookie of the year, and is considered the best defensive end in the national football league.

He’s had some notable incidents, mainly when he tried to kill Steelers’ quarterback Mason Rudolph. But, other than that, he’s been a model franchise player. Today, however, could really throw a wrench in his season.

Myles Garrett was involved in a car accident Monday Afternoon

News broke mid-afternoon that Garrett had been involved in a single-car accident with one female passenger.

#Browns DE Myles Garrett was in a single car crash after practice today. He and a passenger sustained non-life threatening injuries and were transported to a nearby hospital.

Per Ohio State Highway Patrol, Myles Garrett's accident happened around 3 pm. Crash is under investigation. But impairment is NOT suspected; both Garrett and a female passenger were wearing seat belts. Both were taken to an area hospital with non-life-threatening injuries #Browns

That is not good for the Browns, who can ill-afford to have their star miss time. It’s good that injuries are not life-threatening, but even something like whiplash could cause issues for his availability.

This is a big story in the NFL and many people are reacting.

This picture of what is purported to be his car is making its way around social media.

According to WKYC both Myles Garrett and his passenger were wearing their seatbelts and impairment is NOT suspected. Both were taken to hospital for non-life threatening injuries. #Browns pic.twitter.com/OB9ryQ7k9L

This Browns fan is putting things into perspective correctly. That’s something that Browns fans have struggled with lately.

Praying Myles Garrett is ok. A lot of people (myself included) instinctively start thinking about how this will affect the Browns season.

He and the other passenger are alive after the car flipped several times.

That’s all that matters.

#Browns Myles Garrett on what they talked about at the defensive players only meeting: “Pretty girls and fast cars”

Hopefully Garrett is okay and ready to play this weekend.