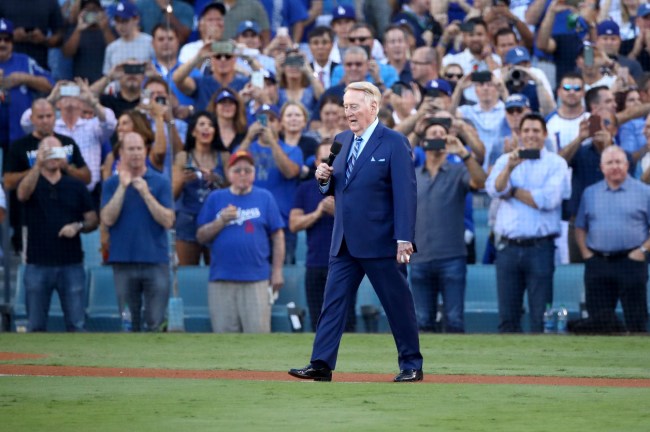 The MLB and the sports world have lost an iconic voice with the passing of legendary broadcaster Vin Scully. The longtime voice of the Los Angeles Dodgers passed away on Tuesday at the age of 94.

Everybody chimed in with the best moments from Scully’s career, and longtime Dodgers pitcher Clayton Kershaw spoke about the special place in the history of the franchise for Scully.

The MLB is doing its part and will be honoring Scully across the entire league today (h/t TMZ Sports).

The tributes for the late Vin Scully will continue on all day Wednesday — TMZ Sports has learned the MLB is asking all of its teams to participate in league-wide moments of silence throughout its afternoon and evening slate of games.

TMZ reports that the overture will take place before each game on Wednesday. Scully’s place in MLB history is prominent, and he called an unbelievable number of games throughout his career.

#Dodgers Vin Scully has called over four percent of all games in MLB history… including those that weren't televised, and those that occurred before the television was even invented.

The nightcap on the day is the Los Angeles Dodgers against the San Francisco Giants in the Bay Area, and we can only imagine the emotions running through the LA franchise. Following Tuesday night’s game, the Giants paid tribute to Vin Scully, and they will do it again Wednesday at the MLB’s request (although they probably would have done so either way).

Dodgers fans flocked to the stadium on Tuesday night to pay tribute.

Yet, Friday night will be the Dodgers’ return to LA, and the tribute for Scully should be enormous. They face the San Diego Padres, which has a ton of storylines for other reasons. Nonetheless, the Scully tributes should be going on for quite some time.