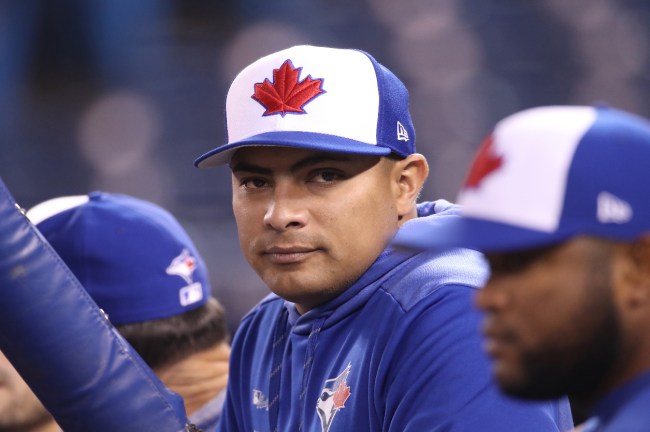 The MLB continues to hand down some puzzling suspensions. This time, it was with Toronto Blue Jays hitting coach Guillermo Martinez, who has been suspended for five games.

Before Wednesday’s game against the Chicago White Sox even started, Martinez got tossed for bringing up the awful performance from Doug Eddings the night before.

If you missed it, Eddings missed 26 ball and strike calls and ignited a fiery MLB robot umpire conversation by fans everywhere. It was, in all honesty, a terrible performance from Eddings.

But, there is absolutely no reason for Martinez to be suspended five games for arguing about that.

The MLB’s Five-Game Suspension For Guillermo Martinez Is Confusing

Seriously, Martinez had every right to be upset and expressed his frustration on Wednesday afternoon. Apparently, he didn’t even say anything remotely close to suspension-worthy.

What I'm told Martinez said that got him tossed: a look at Eddings and, "you missed 26 calls last night."

The sensitivity to the truth is remarkable. https://t.co/xWqLRHkzYH

Wow. That’s a bad look for the MLB. What makes it even worse is that there has been no punishment for Eddings, at least not yet.

As a result, this didn’t go over well with the fans.

He told the umpire he missed 26 calls the day before. Facts are facts.#umpiresgonewild https://t.co/8W4fslYmko

No Doug Eddings should be suspended. https://t.co/aNTQwelYwy

#mlb is a trainwreck… no punishment for the Ump that had a 66% success rate? https://t.co/nJLWiL14UZ

So……By MLB Standards, what Guillermo Martinez did is 5x worse than what Josh Donaldson said to Tim Anderson #NextLevel https://t.co/7JgTtZ86Cb

This is a huge problem, and the MLB has a lot of questions to answer regarding suspensions and umpiring. For instance, Hunter Wendelstedt had a terrible call earlier this season.

Moreover, changes are coming, or at least they should be.

All in all, Martinez and the Blue Jays certainly can’t be pleased with a five-game suspension for telling the truth.