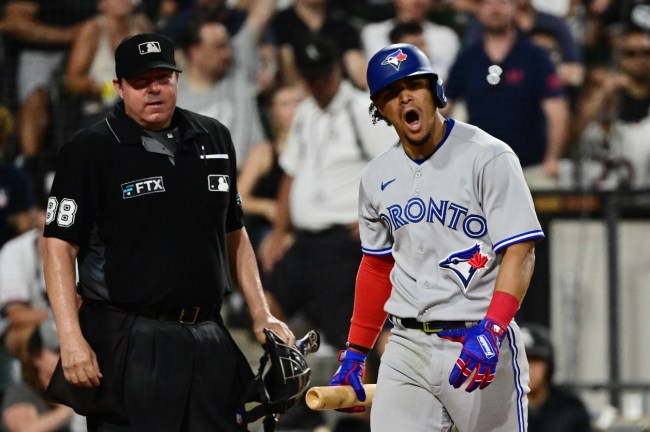 In case you missed it, here are just some of the brutal calls from Eddings.

Doug Eddings missed more balls and strikes calls last night (26) than any MLB umpire in any single game this season, last season, or the season before. 😬🤖 https://t.co/2HELHoZWnW

Eddings scorecard via Umpire Scorecards shows how bad it was for him.

And, well, here’s one inexcusable call. Really, this can’t be explained.

Santiago Espinal has grounds for a lawsuit against Doug Eddings: pic.twitter.com/KHFMJnAz4I

The reactions came pouring in.

Eddings might want to block everybody from his phone, email, and social media. Really anything of that nature.

It was that bad.

Looking forward to the @UmpScorecards on Doug Eddings tomorrow. This is legitimately one of the worst-umpired games I have seen in the strike box era. #Bluejays

Umpire Doug Eddings with one of the worst performances in recent memory and that’s saying something.

These strikes are absolutely absurd. Early in the game it was like Doug Eddings wanted things to move fast so he could make a late-night dinner reservation. Now that he's missed it, he's making everyone suffer.

Prolly slanted in Sox favor a tick but it was seriously the worst game I've ever seen an ump have. Not embellishing. It was sooooo bad https://t.co/2CEUkip3Hm

Be prepared to never watch a game again.

Doug Eddings' punishment for doing a horrible job calling balls and strikes will be that he's the third-base umpire tomorrow. https://t.co/I1DShbL9tt

This was, to be frank, one of the worst umpiring jobs in MLB history and easily the worst in recent memory. As others said, Angel Hernandez would be proud.

The robot ump conversation once again came back, and we saw this already when Hunter Wendelstedt threw out some terrible calls — although Eddings performance is much, much worse.

Umpiring is not an easy job, but missing that many calls in one game is simply inexcusable. Let’s see when — or if — Doug Eddings returns to the diamond.