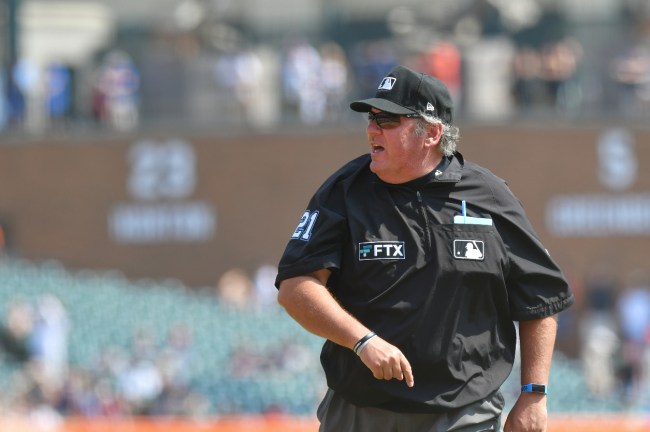 There might be a new candidate for the worst strike call of the 2022 MLB season.

On Tuesday afternoon, the Minnesota Twins and Detroit Tigers faced off in Comerica Park. And, well, just feast your eyes on this horrendous call by home plate umpire Hunter Wendelstedt.

Pretty sure this is it. The worst strike three call of the season pic.twitter.com/jmCay1Lvmv

That pitch was low, way, way low. Yet, somehow, someway, it was called strike three. Tigers catcher Eric Haase couldn’t believe it, and it looked like Twins pitcher Devin Smeltzer was surprised at the call as well.

This didn’t go over well at all, and it reignited the MLB robot ump conversation.

Yet another argument for robo-umps. Catchers have become so good at framing pitches it makes an incredibly tough job (calling balls and strikes) even more difficult.

Can we all agree the umps also need an ear bud synched up with PitchCom? Will help them stay on pitches longer. This is ridiculous.

That’s so bad I don’t even think Angel Hernandez could make a worse call. Thats said, he will try….

In fact, the fifth inning was full of blunders, and Hunter Wendelstedt and Twins manager Rocco Baldelli got into it.

In the top half of the inning, Baldelli and Wendelstedt got into it with one another. Apparently, the Twins manager was unhappy with a strike called against his team and let Wendelstedt know it.

Hunter Wendelstedt on a hot mic:

"You can't see from right there, Rocco, you wanna start an argument?" pic.twitter.com/SFxjPfOvuR

Baldelli wasn’t happy, and in the bottom half of that inning, he got a massive call going his way. Nonetheless, this is inexcusable by Wendelstedt, and the MLB quickly needs to find a way to implement robot umps before it gets even uglier.