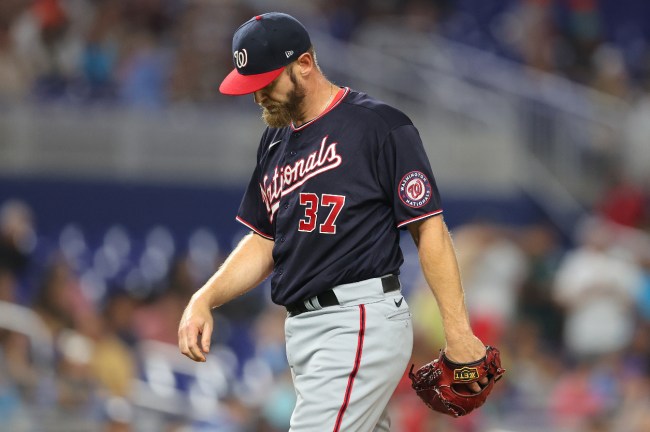 A few years ago, Strasburg was one of the best pitchers in the MLB and was rewarded by the Washington Nationals with a seven-year deal worth $245 million.

Since then, Strasburg has been a trainwreck and has yet to stay healthy.

Stephen Strasburg was one of the best starting pitchers in MLB for nearly a decade (3x AS, WS champion, WS MVP).

He is now going back to the IL.

He made two starts in 2020 and five in 2021 and worked his way back to the Nationals big league squad at the start of June.

Strasburg then took the mound against the Miami Marlins, giving up seven runs on eight hits in 4.2 innings before being pulled from the game.

After his June 9 start, it was reported that Strasburg is headed back to the IL with some type of discomfort — and that isn’t an encouraging sign whatsoever.

The move will be made before tomorrow’s game and the designation is not yet known. Dave Martinez said Strasburg is currently getting an MRI and they should know more tonight. He felt weird after throwing a bullpen session on Saturday. Davey didn’t specify what felt off.

When Strasburg returns remains to be seen.

MLB fans quickly reacted to the news, and it’s safe to say that Nationals fans are tired of this same occurrence with Strasburg.

Was happy at the time Nats prioritized Stras over Rendon (I know, the latter wanted to go elsewhere), but now it looks like 2019 just broke everything

Could this be the worst contract in baseball history? He clearly is not physically able to pitch anymore without getting hurt and has started only a few games in the first 3 years of a 245m contract.

He definitely fleeced the Nats. Should’ve let him walk after 2019. He was fantastic during that playoff run and we had a miracle year but his injury history dates back to the beginning of his career. After this season it’ll be over 100m with essentially nothing to show for it

this almost like pisses me off at this point. His contract is a huge reason why we had to rebuild….and legit negative production from him since….

That contract will continue to be one of the worst in the history of the MLB if Strasburg doesn’t get back to where he was.

Epic disaster of a contract… https://t.co/wjjYDYVruP

Even with all of the good Strasburg has done during his career, at this rate, he will be remembered for this terrible contract.

It will be worth monitoring to see if this is a short trip on the IL for Strasburg or not.