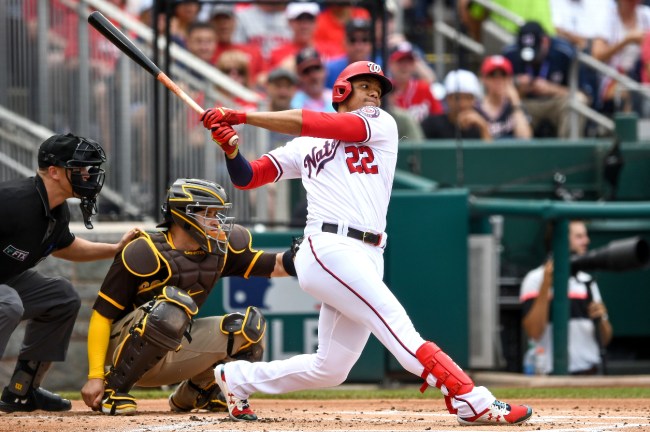 After weeks and weeks of discussions, the Washington Nationals have traded superstar outfielder Juan Soto. According to sources, Soto is headed to the San Diego Padres for a massive haul.

Jon Morosi of MLB Network first reported on an agreement, and then Jeff Passas and Jon Heyman confirmed the deal as done.

Sources: #Padres and #Nationals have agreed in principle on a Juan Soto trade, with Josh Bell also going to San Diego. @MLB @MLBNetwork

One of the biggest deals in baseball history goes down, and it sends the 23-year-old to SD, where he will team with Fernando Tatis Jr. and Manny Machado.

It took a while, and hours before the MLB Trade Deadline, it looks like both sides were able to reach an agreement.

The package going back to Washington for Juan Soto and Josh Bell, sources tell ESPN:

That's the only holdup right now to the agreed-upon deal.

As expected, Padres fans are through the roof with the addition of Soto.

This team is now officially a fuckin problem for pitchers 🤦🏾 https://t.co/rJWVdQaL4b

Holy crap- my boys are going all in AGAIN https://t.co/2TFjDWhNj7

The Padres are also receiving Josh Bell in the deal, something that came to fruition early Tuesday morning. Eric Hosmer is also reportedly going to Washington in this deal.

Eric Hosmer is in Soto deal as @Joelsherman1 suggested

After years and years of missing on top-notch talent and trading away stars, the Padres are reversing course.

Feels great to be a life long Padres fan https://t.co/5OOmsZEG9c

I’ve only known the Padres to be deeply unserious my whole life. This is very disorienting. https://t.co/bEWcGPciKi

They started it off on Monday by signing Joe Musgrove to a long-term deal, then acquired Brewers All-Star closer Josh Hader.

The Padres are loaded, and a lineup featuring Manny Machado, Fernando Tatis Jr., and Juan Soto is scary.

All I can say is wow. Preller got it done https://t.co/54VAcoZfYb

This day keeps getting better! https://t.co/mJwUTZ76on

Time to rejoice for Padres fans. Not only did they land Juan Soto AND Josh Bell, but they were able to get rid of Eric Hosmer’s contract and the recent struggles from the first baseman.

Times are changing in San Diego.