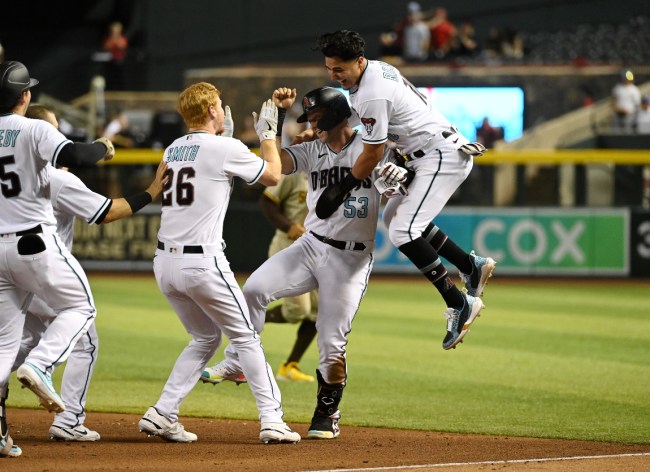 The San Diego Padres had a 6-0 lead against the Arizona Diamondbacks and everything seemed to be going right. Then, things unraveled quickly.

By the end of the eighth inning, Arizona had tied the Padres, 6-6.

In the bottom of the ninth, Christian Walker stepped up to the plate with runners on first and second, two outs, and a chance to end the game.

Walker hit a ground ball…and the walk-off happened, although thanks to a terrible decision by Eric Hosmer.

The Diamondbacks trailed 6-0 in the 7th inning.

They came back to walk-off the Padres in the 9th. Largest comeback in franchise history. 🤯

Hosmer smothered the ground ball but fired it to second, where CJ Abrams was late, and the runner was safe, sending Josh Rojas all the way home from second and giving Arizona the lead.

Seriously, nobody knows why Hosmer didn’t throw the ball to first or, at the very least, hold it and load the bases.

This didn’t go over well, and Hosmer’s decision-making will be questioned even further.

Yeah I think I’m done betting baseball after this one 🤮 https://t.co/NopLD871ED

Stupidest baseball player ever to walk the earth https://t.co/wDcnprfdaN

Why did Eric Hosmer throw to 2nd? https://t.co/NAmj887xQz

it’s about time the padres act like padres this season smh https://t.co/UQI7tVHBfj

Could be hard for people to pin this loss on Hosmer with how bad the bullpen was… not for me. This is embarrassing for a 4 time gold glove award winner. https://t.co/XDYHZ0ZBpb

It looked like Hosmer had a much easier play throwing to first, and if he did that, the game probably goes to extra innings. Ouch.

Thankfully, there are many more games for Hosmer to redeem himself, but this one will hurt for a long time.