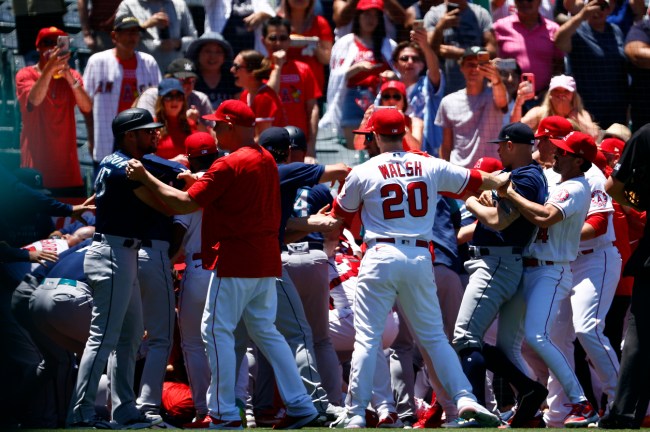 In Sunday’s game between the Los Angeles Angels and the Seattle Mariners, things got out of hand. Tensions were high as the series finale began, and Jesse Winker was hit by a pitch from pitcher Andrew Wantz, who threw a high pitch at Julio Rodriguez in the first inning of the game.

The latest view showed how wild the brawl was between the two American League West opponents.

This alternate view of the Angels/Mariners brawl yesterday is award worthy pic.twitter.com/tpowWQXxzX

Well, the MLB was quick to hand down suspensions, and the list is a long one:

To no surprise, Phil Nevin receives 10 games as the league sends a strong message against retaliation. Winker was given the second-most with seven games, and three players — including Anthony Rendon, who smacked Winker in the face — got five-game bans.

The MLB Drops A Massive Suspensions List, Including The Angels Interpreter

But, the most surprising is the Angels’ interpreter, Manny Del Campo, will miss two games.

What an absolutely massive brawl and a long suspension list — so long that the Angels will need to split up the bans between the coaching staff.

It is a total of 47 games worth of suspensions.

What’s shocking is that Mariners manager Scott Servais didn’t receive any suspension. Again, the MLB hands down some confusing suspension penalties, just like they did to Toronto Blue Jays hitting coach Guillermo Martinez for no reason.

Here’s the entire transcript — with reasoning — from the league.

Suspensions for the #Angels and #Mariners. Coaches and managers can’t appeal pic.twitter.com/dsgiFJXJ1B

This entire thing started with Winker, at least on Sunday. But, Nevin will miss the most time. At least Winker got a pizza out of the deal.