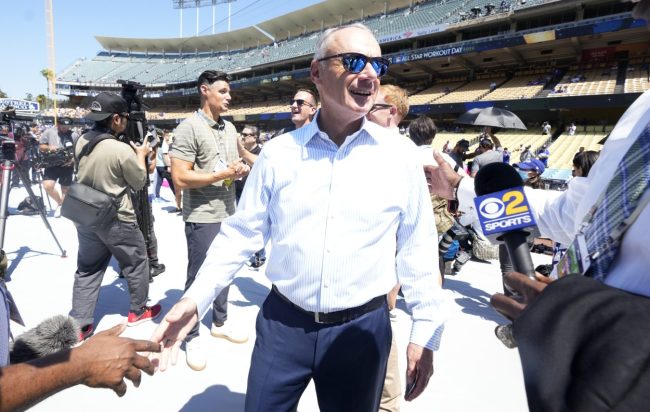 The Minor League Baseball lifestyle is far from a glamorous one. The average salary ranges from just shy of $5,000 in rookie ball to just under $15,000 in Triple-A, according to the Washington Post.

No one who has seen the price of, well, anything lately would call that a living wage. That is, no one except Major League Baseball commissioner Rob Manfred.

Yahoo Sports baseball writer Hannah Keyser asked Manfred a simple question on Tuesday. Keyser questioned whether MLB owners didn’t pay minor league players a living wage because they couldn’t afford it, or because they weren’t interested in doing so.

This was Manfred’s answer.

Asked Rob Manfred if his owners don’t pay minor leaguers a living wage because they can’t afford to or because they aren’t interested in doing so.

“I reject the premise that they're not paying a living wage,” Manfred said.

It is, of course, Manfred’s job as MLB commissioner to look after the best interest of the owners. But his answer to the question is either naive is straight up malicious. Either way, baseball fans weren’t at all happy with it.

I reject the premise that Rob Manfred likes or is actively working towards the success and/or longevity of the sport he's currently commissioning https://t.co/xeJBBJ6hfj

Robbie, sweetie, listen, just because you say something out loud doesn't make it *real* https://t.co/9NjMwtreWu

anyone who says this should have to live a year on the median minor league salary https://t.co/nycBwQzRm5

Rob Manfred is a moron. Plain and simple https://t.co/r9YxMkhJBH

What makes the answer even more interesting is the fact that Major League Baseball only recently settled a lawsuit for a whopping $185 million over minimum wage and overtime violations. The settlement is part of a class-action lawsuit filed in February 2014 by former Miami Marlins minor leaguer Aaron Senne and two other retired minor league players. The league settled on May 10, just before the case was to proceed to trial.

Seattle Mariners rookie Julio Rodriguez put Major League Baseball’s wage issues on full display on Monday night. Rodriguez took second in the MLB Home Derby. He took home a check for $750,000 in the process. That’s $50,000 more than the All-Star outfielder will be paid all year.

Manfred’s contract as the league’s commissioner expires in 2024. Though he may not make it that for at this rate.